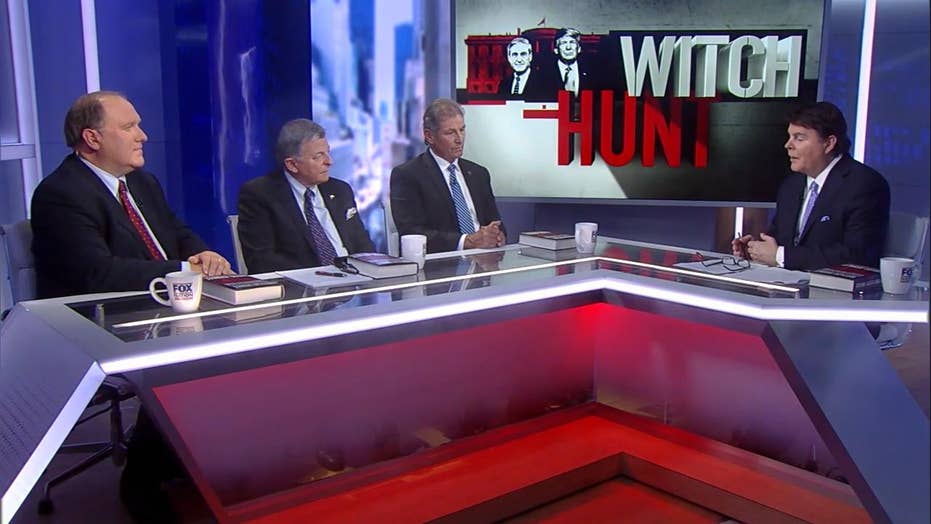 "This is our generation's Church Committee moment ... It's our chance to fix what was wrong, get it right," said Fox News contributor and executive vice president at The Hill, John Solomon, referring to the 1975 U.S. Senate select committee, chaired by Sen. Frank Church D-Idaho., that investigated abuses by the CIA, NSA, FBI, and IRS.

On Thursday, Fox News reported two significant developments in the ongoing probes into potential FBI and Justice Department misconduct in their investigations into President Donald Trump and his campaign in the run-up to the 2016 election and through the spring of 2017.

Justice Department Inspector General Michael E. Horowitz told Senate and House lawmakers that he was "nearing completion" in the process of finalizing his report into potential Foreign Intelligence Surveillance Act (FISA) abuses, according to a letter obtained by Fox News.

On Fox Nation's "Witch Hunt," which was recorded in September, Fox News legal analyst Gregg Jarrett and a panel of experts analyzed the potential abuses and even crimes that may have occurred in the course of the DOJ investigation into Trump's campaign.

"John Durham... he's been hand-picked by Attorney General William Barr to investigate the investigators," said Jarrett.  "Because as Barr said, 'How did this happen? How is it the president of the United States could be accused of one of the most serious crimes of all, treason, and the evidence ends up that it never happened.'"

"It's very important for us to get rules in place so that this cannot happen again," said Solomon.  "There are two really big things here. Deceiving the FISA court... and then we have to have a much higher threshold for using the FBI to target a presidential campaign in the final weeks of an election, using the material that was given to it, by [an] opponent."

The Justice Department and FBI obtained warrants in 2016 to surveil Trump adviser Carter Page.  Partially redacted versions of the FBI's FISA warrant to surveil Page revealed that the FBI relied on a largely discredited dossier written by British ex-spy Christopher Steele that was funded by the Hillary Clinton campaign and Democratic National Committee. But, the FBI apparently obscured that fact in its warrant application, telling the secret court only that the dossier was prepared at the behest of an unidentified presidential campaign.

"It strikes me that the [Foreign Intelligence Surveillance Court] was defrauded, isn't that a crime?" asked Jarrett, who is the author of the new book, "Witch Hunt: The Story of the Greatest Mass Delusion in American Political History."

"It's a crime -- not only to give false statements to the court, it's a crime to omit material information and frequently even if you make full disclosure the judge may ask questions," said Jon Sale, former Watergate prosecutor and one-time attorney for Rudy Giuliani. "But here they were given half the story and half of that was probably intentionally false."

"I wonder if a judge would have signed off on it if he or she knew that it was a paid-for product by a third party P.I. firm," remarked former FBI Assistant Director Chris Swecker.

"It's similar to a money-laundering scheme. The whole point was to disguise the origins," concluded Jarrett.

"This was a pretty corrupt inner circle," said Swecker.  "It's almost a perfect storm of bias inside the Comey inner circle."

He continued, "One by one, [Comey] promoted people before their time... Strzok was promoted two-steps in a year.  Lisa Page came in from the outside as an attorney, and it just seemed like he shaped that inner circle in his own image... They felt like they were protectors of the public that they were going to protect us from Donald Trump and so they were justified in making these rules and breaking these rules and they broke a lot of them, leaking, lying, laundering information, FISA abuse."

To watch all of "Witch Hunt" visit Fox Nation and join today.