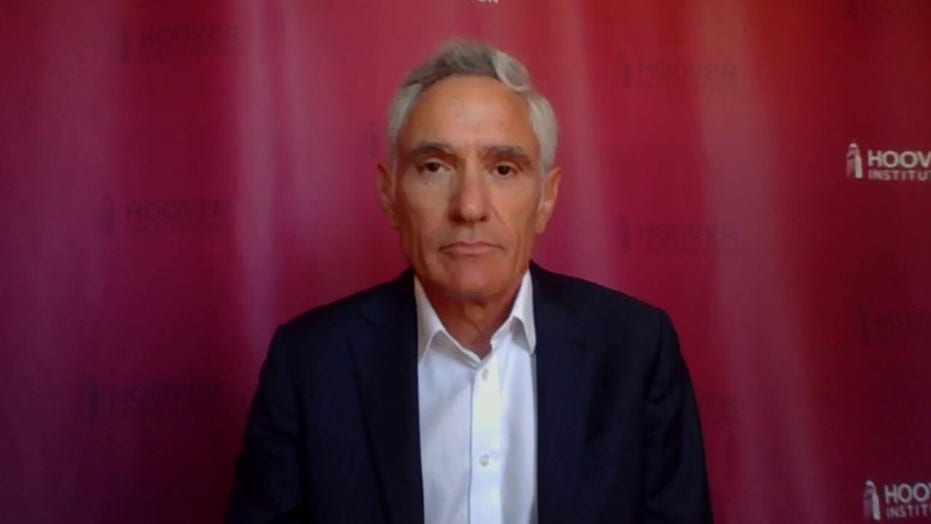 Dr. Scott Atlas on the state of the pandemic as daily infections approach 70,000

The recent surges in U.S. coronavirus cases can be traced to two key factors -- crowds of protesters and proximity to the U.S.-Mexico border, Dr. Scott Atlas, a senior fellow at The Hoover Institution, said Saturday night.

Most of the cases in the Southwest -- California, Arizona and Texas -- are occuring in counties closest to the U.S.-Mexico border, Atlas told anchor Jon Scott during an appearance on on "Fox Report Weekend."

"When you look in the southern counties of California, Arizona and the bordering counties of Texas -- with the Mexico border -- these are where most of these cases are really exploding," Atlas said. "And then you look at the Mexico map and in Mexico, that's where their cases are. Their cases are in the northern border zone states. And it turns out the timeline here correlates much more to the Mexico timeline of increasing cases than anything else."

IN FLORIDA, OVER 40 HOSPITALS MAX OUT ICU CAPACITY AMID CORONAVIRUS SURGE

Spikes in Texas, Florida and Arizona don't essentially line up with reopening but with Mexico's surge and the recent protests that have gripped the U.S., Atlas said.

"When you really look closely at these so-called re-opening policies, whether it's in Georgia or Florida or Texas, you know, we didn't really see a big correlation of cases and hospitalizations from that," Atlas said. "That's really not true. That's sort of some sloppy thinking, I think, again. We really ... have to look closely at why these things are happening.

"By the way. California didn't really reopen. Yet they have cases coming up. Why is that? I mean, that's because these cases don't really correlate to that."

'A setup to spread cases'

"They correlate mainly to two things -- the big thousands and thousands of people with protesting, sharing megaphones, screaming. That's a setup to spread cases," Atlas said. "And also when you look at the analysis of the border counties, there's a tremendous amount of cases coming over the border and exchanging with families in the northern Mexico states."

"So the real concern that that I see right now is that there are hospitals getting crowded in their ICUs and this is clearly a concern," Atlas said. "The crowding is from the reinstatement of regular medical care, which is actually very important. We have locked that down before and that policy kills people. So we don't want to go back to that."

"The solution to this is really protect the high risk in a more diligent way than we are, the very highest-risk group. We have been very, very clear about that to people," Atlas said. "The second part is increase the hospital capacity."