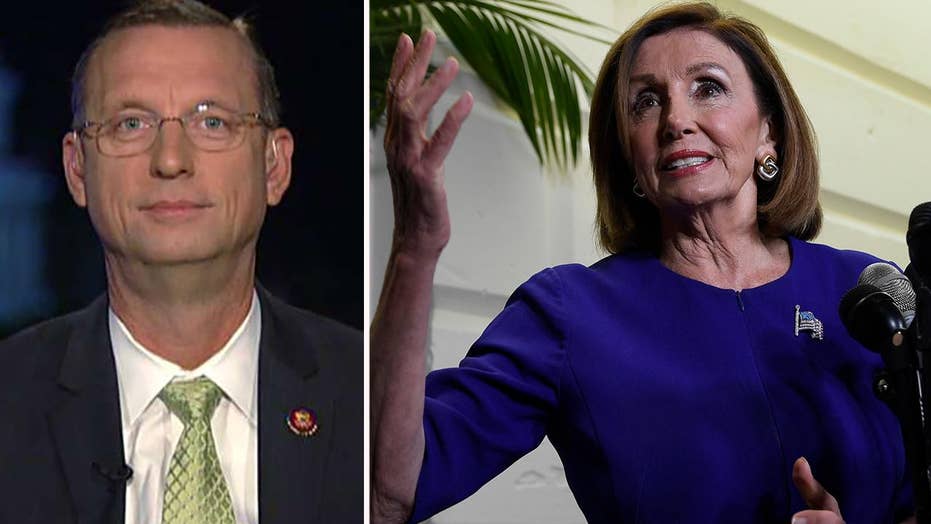 Rep. Doug Collins says the 116th Congress will be known as the 'chaos Congress'

Georgia Republican Rep. Doug Collins weighs in on House Speaker Nancy Pelosi's decision to launch a formal impeachment inquiry. He says instead of governing, Democrats are abusing the rules of the House to make a political statement.

Rep. Doug Collins, R-Ga., said on Wednesday that there is not yet a formal impeachment inquiry against President Trump over events surrounding a phone call involving the president of Ukraine.

“What’s really happening here is nothing except the perpetration of fiction among the voters of America,” Collins told “Fox & Friends,” challenging House Speaker Nancy Pelosi to move forward officially.

“If she wants to do it, she needs to bring it to the floor," he said.

A source familiar with the matter told Fox News that the whistleblower had no firsthand knowledge of Trump's July call with Ukraine President Volodymyr Zelensky. Trump, who has been accused of trying to pressure Zelensky to investigate the family of Democratic presidential candidate Joe Biden, vowed earlier Tuesday to release a "complete" transcript of the call by Wednesday.

“What they want them to believe is they’re up here doing something that they are not, simply because they hate this president. They cannot stand the fact that he’s leading, that he’s actually doing stuff for our country and that they can’t defeat that,” Collins said.

He said when it comes to impeachment, Pelosi "is not a leader," but is following liberals in her caucus like Rep. Alexandria Ocasio-Cortez, D-N.Y.

“I know for the Democrats if it says ‘the,' 'and,' or a pronoun, they’re going to say it raises eyebrows because all they’ve wanted to actually do is impeach this president,” Collins said.

The contents of the call, as well as the whistleblower complaint, could throw cold water on Democrats' explosive suggestions that the president improperly threatened to withhold aid to Ukraine unless it investigated Biden and his son, Hunter.

Republicans had predicted over the weekend that such an impeachment inquiry could backfire on Pelosi, and administration officials have said Trump was concerned only with broader corruption in Ukraine.