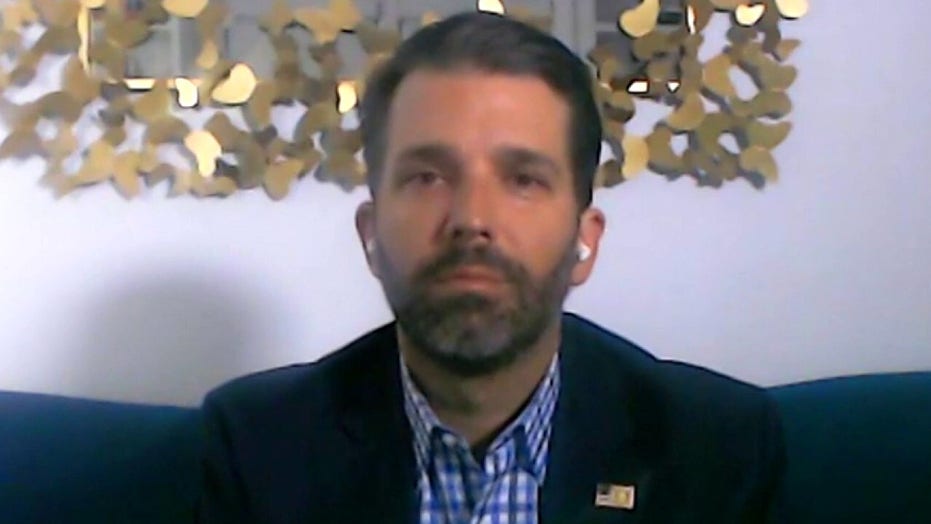 Quarantine Routine is a regular feature that asks political power brokers and public figures how their daily lives have changed -- and how they're still doing their jobs -- during the coronavirus crisis.

The coronavirus outbreak has disrupted virtually every facet of life in America, including politics. Every campaign at the local, state and national levels has been forced to rethink their strategy thanks to social distancing guidelines and stay-at-home orders that have been put into place in many states, some of them continuing into the summer.

Donald Trump Jr. is not only President Trump's eldest son. He is also one of his father's biggest advocates on the campaign trail, making regular appearances at packed rallies across the country to rile up the crowd before the president takes the stage.

While life in quarantine has become an obstacle for his father's reelection campaign, Trump Jr. is confident that he and those working to win the president a second term will make that happen by triumphing in the digital landscape.

In a Q&A with Fox News, Donald Trump Jr. discussed the challenges he faces as a people person who can no longer interact directly with Americans and his eagerness to rebuild the economy his father has championed for much of his presidency.

Donald Trump Jr.: "My daily routine has taken a pretty big hit for the past few months obviously. I've spent most of my time on the road, meeting with people, dealing with people, campaigning for people including my father, fundraising ... so now having that, you know, [be] essentially 100 percent digital and being locked up in one spot for weeks on end has certainly been a drastic change. I've probably spent, you know, 75 percent of my nights on the road for the last -- over a year. So that's been a big change and adapting has been rather interesting.

That said, I think we've made a really good effort to be really active digitally because of the data-driven aspect of our campaign. I think we've been able to make that transition pretty smoothly and faster than most. But again, for someone like me who sort of enjoys the retail politics side of things, that is a really big change and has changed us a lot."

Donald Trump Jr.: "It's interesting. I sort of feel like I lose track of time a lot more. Not just with what day it is but I find myself up into all hours of the day, sleeping at different times ... because of the nature of things and because of being able to do things digitally, there's not really as well of a defined schedule as I would normally have where you're doing X, Y, and Z at this time ... So that has been a really big change to me and I have noticed that it has created some interesting nuance where time has sort of hooked away and whenever things happen, they happen.

Nerf gun battle with the kids. Doing the best we can minimizing our exposure to others and vice versa. #selfisolation #togetherapart #kids #familytime #nerf

Fox News: What do you miss the most about how you did your job before this began?

Donald Trump Jr.: You know, I'm a very personable guy. So obviously, the interaction with people and I do love, especially on the political side, getting in front of Americans who've benefited from my father's policies and speaking to them and hearing their stories and hearing what they have to say. And honestly, from the business standpoint as well, I mean, there's definitely, you know, doing this sort of business and work remotely is just not as effective, not as efficient as doing it in an office-type environment.  You can see that right off the bat. If there was ever a case study ... In terms of productivity, I definitely see quite a bit of that lacking right now.

Fox News: What surprised you most about how life has changed?

Donald Trump Jr.: Well, you know, I'm blessed to have a place over my head and I can see that there's a lot of difficulty for a lot of other people right now that are suffering. Being tucked away in a home is not a big deal relative to some of the suffering that so many Americans are going through right now. So my biggest thing is, you know, waiting to get the all-clear ... and to get back to work and try to help my father rebuild this economy. I mean, he built the greatest economy America has ever known. He's the guy that can do it again, and he will, but it's not going to happen overnight. That's going to take some time and that's going to take some real effort and getting those things going and restarting this engine again, but we have to do it.

Donald Trump Jr.: I don't as much as I normally would, just because if I did do something, then you get criticized. You see all of these people, if they go for a jog [and] they're totally by themselves, [it's] 'Oh no, I can't believe they're not in self-quarantine!' It's a little bit ridiculous. And so it's been a lot harder to sort of blow off steam ... I've been at my cabin upstate a lot ... and [I] sort of, you know, go outside and do some of the outdoor things that I like to do because they're right there on my place. So that aspect [has] pretty much stayed the same where I do that. I just can't do it at the same level. And, you know, [I'm] obviously, being much more safe in one location.