Don Jr.: The American people see through the impeachment hoax

Donald Trump Jr. blasted Sen. Mitt Romney, R-Utah, Wednesday night as a "coward" who shifts with the political winds and is jealous that he "blew" his 2012 presidential bid after Romney became the only Republican who voted to remove President Trump from office following the Senate impeachment trial.

On "Tucker Carlson Tonight," host Tucker Carlson referred indirectly to Romney's former firm, Bain Capital, and suggested he may not be the right person to lecture the public on moral decisionmaking.

"Let's say you devoted your life as ... a businessman, buying companies and then firing a lot of people and offshoring a lot of the company and you got rich doing that -- whatever, a lot of people do that in private equity. Would you be in a position to deliver overwrought moral lectures to others?" he asked Trump Jr.

The first son responded that such a thought is "ironic" given Romney's political record.

Romney, a Michigan native, served one term as the governor of Massachusetts, then made his unsuccessful presidential bid before settling in Utah to run and win former Sen. Orrin Hatch's U.S. Senate seat. 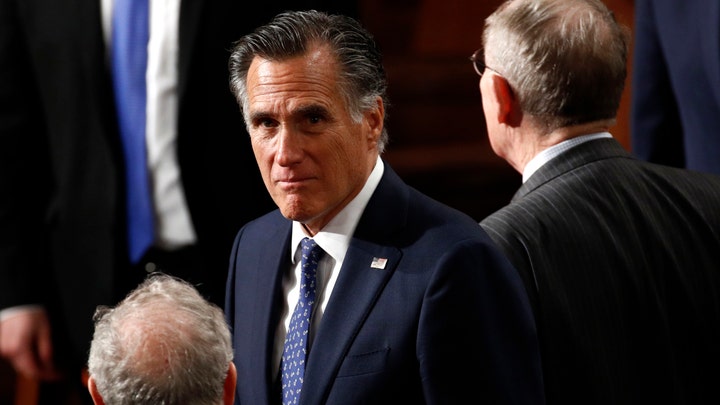 "He has flip-flopped for political expediency on every major conservative issue that he says he believes in," Trump Jr. said, pointing to Romney's stance on abortion issues as a purported example. "Go look at the record -- it speaks for itself,"

"The reality is he has come to Donald Trump for his endorsement, for money when he was running [in 2012]. He blew his chance 'bigly' and he is so bitter about it he cannot let it go," Trump Jr. added.

Romney met with President Trump at the former real estate mogul's Somerset County, N.J. golf club shortly after the 2016 election and was reportedly in the running to become secretary of state. However, he has not had many public interactions with the president since.

"He cannot do the right thing. He cannot do what the people of his state want. He is purely -- like Nancy Pelosi -- just blinded by hatred because when he had his shot, he couldn't do it," the president's eldest son said.

Trump Jr. said he views Romney as more concerned with ingratiating himself with the media or Democrats than his constituents, despite his assertion that the former "destroyed his presidential run."

"It's become now so transparent that you can't even hide from it. He is not brave. He is a coward," he concluded.

Earlier Wednesday, the 72-year-old Romney appeared to become emotional while speaking on the Senate floor, saying would vote his conscience and was prepared to receive blowback from the president or any other quarters.

"[M]y promise before God to apply impartial justice required that I put my personal feelings and political biases aside," he said. "Were I to ignore the evidence that has been presented, and disregard what I believe [that] my oath and the Constitution demands of me for the sake of a partisan end, it would, I fear, expose my character to history’s rebuke and the censure of my own conscience," he said.

Romney voted to convict Trump of abuse of power, but voted to acquit him on the charge of obstruction of Congress.