Rick Scott: Democrats are ‘all-in’ on high gas prices, nothing will change while they’re in charge

Sen. Rick Scott, R-Fla., said on Tuesday that the Democrats are "all-in" on high gas prices and suggested nothing will change as long as they are in charge.

"What’s going to get it to go down? The Biden administration is not making it easier to drill and we’re the safest drillers in the world. They’re not open to this at all. They’ll have a soundbite and say they are, but they’re not," Scott told "America Reports."

Scott argued the U.S. has rich resources of oil and gas that should be utilized.

"We’ve got to use them and use them safely. We’ve got to get an administration that cares about this," he said.

NANCY PELOSI: ‘SO MUCH IS BEING DONE’ BY BIDEN ON INFLATION, MUST ‘MAKE SURE PUBLIC SENTIMENT UNDERSTANDS’

The national gas price average hit $4.567 per gallon on Wednesday, reaching a new record high. The average price increased by four cents overnight. According to AAA's analysis, nearly every state has seen the price of gas increase to over $4 per gallon.

President Biden recently canceled a 1-million-plus acre oil and gas lease in Alaska on May 11, claiming it was "due to lack of industry interest." 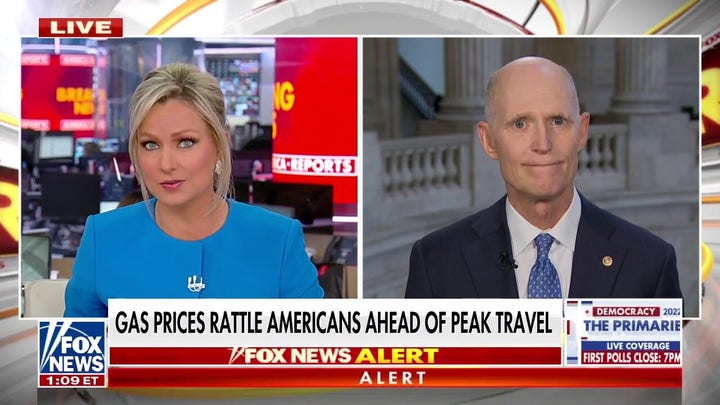 Scott said he doesn’t see how the high gas price situation will get any better because the Democrats "block" anything the Republicans propose to help ease costs.