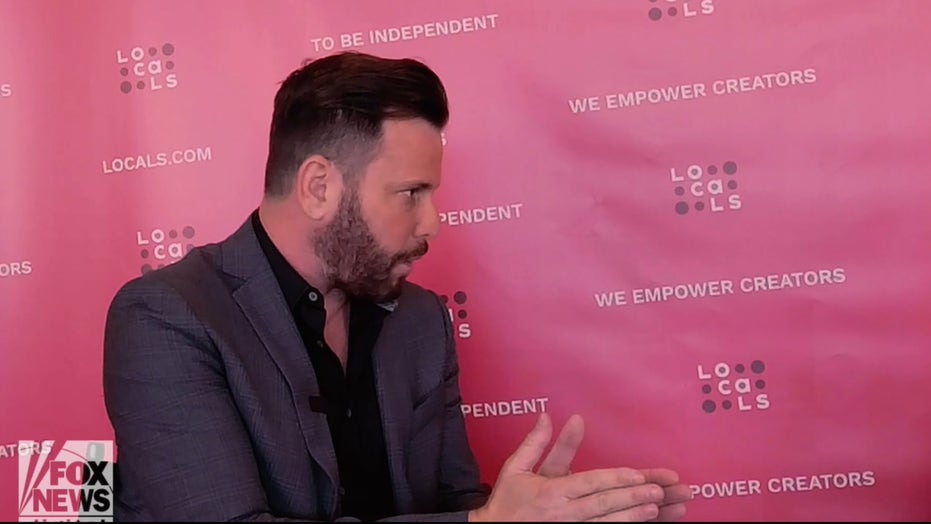 Dave Rubin discusses Big Tech, censorship and why the media is 'even worse' under Biden

The 'Rubin Report' host shares how conservatives can fight back against Big Tech censorship and how the media is doing under the Biden era.

Political commentator and YouTube personality Dave Rubin sat down with Fox News to discuss the growing threat of Big Tech, the censorship debate and the media's partisan evolution before, during and after the Trump era.

Rubin, who was invited to speak at the National Conservative conference in Orlando last week, has come a long way from his days as a "liberal lefty" on the progressive news outlet The Young Turks and a 2016 supporter of Sen. Bernie Sanders and now identifies, though a bit tongue in cheek, as a "far-right, crazy, freedom-loving American conservative, libertarian maniac."

"I started waking up to some of the stuff that we all now see as very obvious," Rubin told Fox News. "I started saying, 'Hey, we on the left, why are we shouting everybody down at college campuses? Why are we calling everybody racist? Why are we calling everybody homophobes? They can't all be Nazis. We're not making arguments. We're just using these labels on people and that's not- that's not what I thought liberalism was about. In essence, liberalism actually isn't about that. I mean, that's the dirty secret amongst conservatives is that there is a difference between leftism and true classical liberalism, which is about individual rights and laissez-faire economics and things of that nature."

Rubin expressed "what really changed" him was how conservative icons he once viewed as "the bad guys" like commentators Dennis Prager, Larry Elder and Ben Shapiro, as well as Republican lawmakers like Sens. Ted Cruz and Marco Rubio, were actually "pretty decent" people who were "willing to have that conversation" despite any political disagreements they may have.

"I'm actually thrilled to be here because I think what's happening here at the National Conservatism conference is that people are saying, 'Hey, we've got old school liberals, we've got libertarians, we have, say, religious conservatives,' but can these people all exist In a political movement? I think they can. That's really the challenge of the conference," Rubin said.

The "Rubin Report" host railed against the media and its "love" for Big Tech censorship since it's "protecting their narrative."

"The people on CNN are not journalists. And you really need to understand that. Don Lemon and Chris Cuomo and Wolf Blitzer and Anderson Cooper and the rest of them are not journalists. They're all Democrats, obviously. That's not a controversial statement," Rubin told Fox News. "They're Democrats who basically launder Democrat and lefty talking points through the media, they launder the lies and they present it as truth. So the reason they're okay with the censorship is they don't like the other narrative getting out there."

Rubin himself was the subject of Big Tech censorship over the summer when Twitter locked his account over a tweet that correctly predicted the implementation of federal vaccine mandates and decrying booster shots despite how COVID continues to spread among the vaccinated, writing "A sane society would take a pause. We do not live in a sane society."

After accusing him of "spreading misleading and potentially harmful information related to COVID-19," Twitter later admitted its crackdown of Rubin was an "error" following intense backlash.

"They want to control the narrative and if you get information out before they want you to get it out, you're in trouble," Rubin said.

Rubin expressed his battle against Twitter reaffirmed why he created Locals, a content-sharing platform that recently merged with the video-sharing platform Rumble, declaring the partnership the "first real tangible move against Big Tech."

"Rumble has incredible, incredible infrastructure, the underbelly of the Internet to really compete with Amazon, AWS, so websites can't get blown off the internet the way Parler was after January 6. Locals- we built it from the ground up… What we're trying to do- and the reason these two companies came together, is we want to create a parallel ecosystem," Rubin told Fox News. "I'm not saying Twitter shouldn't exist. I'm not saying YouTube shouldn't exist. Let them exist, but they're censoring us, we know all the things they're doing… So we're just gonna create better products… So we are going to build a parallel ecosystem that treats speech more fairly, that we're going to try to be as transparent about our policies as possible. And I think this is really the first chance that we've had to stop this Big Tech onslaught."

Regarding whether or not Congress has a role in the censorship debate, which he referred to as the "million-dollar question," Rubin believes that "human ingenuity and technology is the answer" but also the Big Tech companies have become "so massive" and "unbelievably powerful," the government at the very least can "make sure that we have a free market so that competition can exist."

However, he did admit that the government is "not really good at anything" so the idea of its involvement "isn't great."

"I would prefer to do it with new technology and new ideas, but I think there's a very healthy debate there and I think you can make arguments a little more for intervention, that would be just fine, too," Rubin said.

Rubin, who has no relation to Washington Post columnist Jennifer Rubin, tore into the media's transformation during the Trump era, noting how it was "a little hard to see how partisan they were" but that the 45th president "unmasked everybody" and "caused these people to just fall on their own sword" and expose themselves as "Democratic operatives."

"All the media has to be is not horrible. They don't have to be great. Nobody expects them to be great. Just don't be horrible, but they cannot stop. They cannot stop themselves," Rubin said. "So I think what Trump did was expose the whole thing. And now because of that exposure, now that's why we have such tension between the online media and the mainstream media because it's obvious and it's out there and we are… we're battling for truth. And I believe the truth will set you free…. So I believe we're on the side of truth and I think I have great hope that we can keep winning intellectually, at least for now. And then maybe that will work its way into the culture and into the political system."

When asked if the media has gotten any better under President Biden, Rubin replied, "It's even worse."

"Everyone knows there's something cognitively wrong with Biden. They refuse to cover it on mainstream media. They run cover for his ridiculous press conferences where they lie about everything. And let's be very clear: if Donald Trump was using the federal government to demand that companies and the federal government itself force people to be vaccinated, every single person who is for vaccine mandates right now would be screaming that this is Nazi-style assault on freedom," Rubin said. "So that's what I mean. Trump exposed them and now they're all going for it… You don't have to dislike [Biden] as much as me but if you were just an average person, you might say, 'Hey, you know, supply chain problems, gas price problems, food problems, Afghanistan- a bit of a disaster. We don't talk about that anymore.' But there's just no criticism because he's their guy."