Medford Township Board of Education candidate Kristen Sinclair and Camden County School Board candidate Eric Simkin argue the New Jersey Education Association is 'doubling down' on their war against parents.

A database of state- and federal government-sponsored surveys used in school districts across the country show children being asked if they are transgender, whether they have used drugs and if they have ever made a plan to kill themselves.

The database, complied by parents rights group Parents Defending Education, includes surveys from 37 states and the District of Colombia, along with a federal survey.

The "2021 Healthy Kids Colorado Survey" asked middle schoolers whether they have "ever forced someone to have sex with you when you knew they did not want to."

A survey in Kansas asked students as young as sixth-graders whether they have "ever made a plan about how you would kill yourself," with answers ranging from "Yes, in the past 30 days" to "No/Never."

A survey in Illinois asked eighth-graders how often they sold illegal drugs or were drunk or high at school.

In Arizona, a survey asked students beginning in eighth grade how often they used cocaine or crack.

The "California Healthy Kids Survey" asked high schoolers whether they were transgender.

"No matter how children answer on these surveys, schools will consistently manipulate the results, so they can claim that requests for more funding for social emotional learning, equity directors and diversity training are ‘data driven,’" said Parents Defending Education Director of Outreach Erika Sanzi.

"The data on students that they mine, store and share with God knows who doesn’t only lead to division among students and staff, but it invariably drives academic outcomes into the ground. It’s a very predictable and sad pattern playing out all over the country," she continued.

According to the Protection of Pupil’s Rights amendment, schools cannot require students answer questions about political beliefs or affiliations, mental problems, sexual behavior or religious beliefs, among other categories, without parental consent.

A girl holds the Transgender Pride flag during the pride march held in one of the most important streets of Madrid.  (Photo by Luis Soto/SOPA Images/LightRocket via Getty Images)

Several of the surveys were created by Panorama Education, an education consulting company with ties to Mark Zuckerberg and Attorney General Merrick Garland’s son-in-law.

Parents Defending Education recently reported on two additional school districts – the Charleston County School District and Wilson Country Schools – both of which have contracts use Panorama services in their schools. 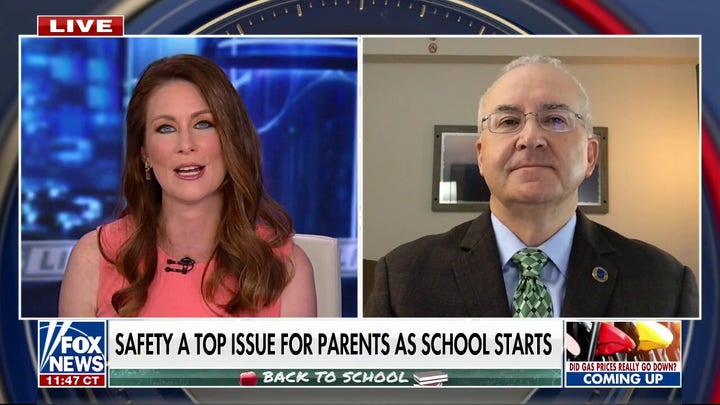 Sanzi noted that parents often have no insight into how data from these surveys, which are collected by private companies, is being stored.

"When parents ask who owns the data and how it is stored and shared, they consistently run into a brick wall," she told Fox News Digital.

The Panorama Education Student Survey, available in Rhode Island, asked students how unfairly the adults treat students at school, and how often students are encouraged to think deeply about race-related topics at school.