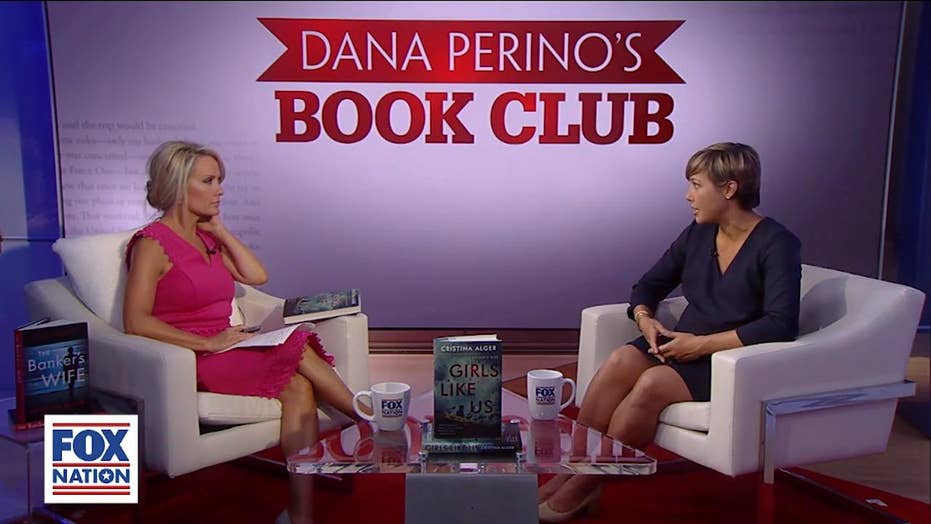 Fox News anchor and co-host Dana Perino sat down with some of America's best-selling authors to learn more about them and their work on Fox Nation's "Dana Perino's Book Club."

For Christmas 2019, Perino selected her top 5 favorite episodes and the books that she believes would make great holiday gifts.

"I was a lawyer in my previous life," hit mystery and thriller writer Cristina Alger told Perino. "I loved true crime and the sort of spark of inspiration for this book was a true crime that happened in a small town called Gilgo Beach, which is sort of down the road from where my family lives in Suffolk County in New York."

"It's an unsolved case still, where they found the bodies of four girls on the beach, buried on the beach," she explained. "And that case always fascinated me. And I did a lot of research into it just for my own morbid curiosity. And it sort of sparked the creation of Nell, who's the FBI agent who becomes the protagonist in this book, who solves a similar case."

"Another interesting thing is that as Nell goes through... when she's piecing things together -- it's another woman that helps her put the pieces together," noted Perino.

"I find there are a lot of thrillers that all the characters are men and the women are kind of ancillary characters,"  said Alger. "So I like having the women be sort of front and center in my books."

"I don't know if I can actually say this word on Fox Nation," said Perino introducing Mark Manson's book on her show.  "I probably can, but I won't because I am Dana Perino and you know that I cannot do that."

"How is this a book about hope?" she asked the best-selling self-help author.

"Everybody is always looking for hope, and what we don't realize is that to have hope for something you need to feel that there is something wrong in the world," Manson said.

"The starting point of the book," he continued. "There's a bit of a paradox going on, which is by every material metric, things are better than they've ever been. But in terms of mental health statistics, depression, anxiety, suicide, drug overdoses, things are getting much worse...  so I wanted to investigate what is the psychological basis of that. What is it about the 21st century that makes it more difficult to find a sense of meaning or sense of hope?"

"The Breakthrough: Immunotherapy and the Race to Cure Cancer" by Charles Graeber

Award-winning journalist and author Charles Graeber revealed the inspiration for his book about a previously-obscure breakthrough in the field of cancer treatment was a coincidental conversation.

"I happen to be on a plane with somebody that was familiar with some of my other work... and we got to talking," said Graeber. "He was a PhD, biological background, the most interesting thing he knew about was this paper in this field and I said, 'This can't possibly be true, or I would have heard something about it.'"

"Nobody I knew had heard about it," he discovered while doing initial research into the topic.  "I couldn't find doctors that knew about it. The oncologists that I knew casually hadn't heard anything about it. The older oncologists said, 'Oh, yes, that's been disproven long ago.'"

However, as Graeber revealed in his book -- the breakthrough cancer treatment is real, and the researchers behind it were eventually awarded the Nobel Prize.

"The Point of It All: A Lifetime of Great Loves and Endeavors" by Charles Krauthammer, edited by Daniel Krauthammer

Daniel Krauthammer appeared on "Dana Perino's Book Club" to discuss the paperback edition of his father's book "The Point of It All: A Lifetime of Great Loves and Endeavors," which is a collection of columns, speeches, and essays.

"One of the things you write about in the essay that introduces the book is that so many people have asked you, 'What would your father think about today?" observed Perino.

"I can't say what he would say now," answered Krauthammer. "And I never try to guess. But I do know how he would say it and what principles and what fundamental ideals he would bring to bear because I think that's what he did his whole career."

"I think he was such a good example of how you should have an argument," Krauthammer concluded. "It's being truthful, logical, also meeting the opposition in good faith of addressing their arguments and ideas and not trying to undermine their character or claim that they are bad people - with the ultimate aim of trying to persuade and convince those on that other side or convince those that are undecided."

"I've read every word, every single sentence in this book counts. It's well-researched. It's funny. You'll learn a lot," said Perino of the new book by Jared Cohen, founder and CEO of Jigsaw.

"Accidental Presidents" delves into the circumstances of eight men who became president of the United States -- not because they were elected to the office, but because the incumbent president died during his term.

The book also reveals the close calls that nearly changed the course of history, including the nearly-forgotten attempted assassination of President George W. Bush in Tbilisi, Georgia in May 2005.

"You had a live grenade thrown at the president and it ricocheted off of a woman's head," Cohen recounted, "And then on top of that, the grenade itself had had some kind of unlikely malfunction. So it didn't go off."

"Had it gone off," said Cohen, "I think that there's a decent chance some of the shrapnel from it could have hit the president [and] could have certainly killed a lot of people around there."