It appears CNN has listened to its critics and decided that the Russia investigation is relevant again.

The first installment of CNN’s two-night Democratic primary debate in Detroit was mocked because it concluded without a single mention of CNN’s longstanding narrative that blew up during former Special Counsel Robert Mueller's testimony.

But Don Lemon finally asked about it during Wednesday’s second debate.

“Let’s talk about now, the former Special Counsel Robert Mueller’s appearance in front of Congress last week,” Lemon said, referring to Mueller's recent appearances before the House Judiciary Committee and Intelligence Committee. “When asked whether or not the president can be charged with a crime after leaving office, his answer was ‘Yes.’”

Lemon then asked Sen. Kamala Harris -- a former California attorney general who has said she would move forward with obstruction-of-justice charges against Trump if she wins the White House in 2020 -- why it’s OK for her to advocate for the Justice Department to prosecute Trump while criticizing others for doing the same.

Harris said she would “never” direct the Justice Department to prosecute someone, while noting that Mueller’s testimony proved obstruction, in her opinion.

Lemon then asked Sen. Cory Booker about the Mueller report and his declaration that impeachment proceedings should “immediately” begin.

Other candidates were also asked about the Mueller report -- a drastic difference from the previous night's debate, when the topic was completely ignored. 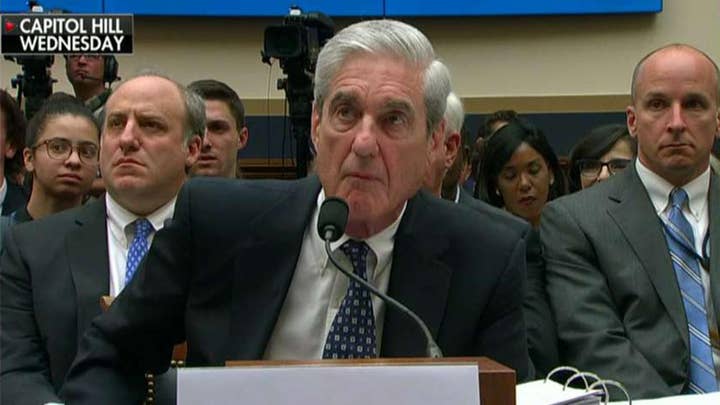 Everyone from CNN employees to conservative media watchdogs condemned the network for the omission.

Mueller's testimony before the two House committees last week was largely considered a “disaster” for Democrats and opponents of President Trump -- including many pundits on CNN -- who hoped the former special counsel would provide a path toward impeaching the president.

Conservative strategist Chris Barron told Fox News that CNN’s decision not to ask about the Mueller probe “speaks volumes about how little political currency Mueller or the Russia hoax has even among Democratic partisans” at this point.

“It is fascinating that Mueller, who Democrats have spent two years making the centerpiece of their efforts to undermine the President, was conspicuously missing from last night’s debate,” Barron said.

“After two years of breathless media coverage of Russia and its supposed influence on 2016, not a single word last night in #DemDebate about Mueller. Even those radicals on stage realize Americans care about jobs, immigration, healthcare... rather than a few Russian media trolls,” Cortes tweeted.

Luckily, CNN managed to find time to ask about Mueller on the second night of the two-day event.