In media news today, AOC gets roasted for crying over Israel Iron Dome House vote, Joe Rogan predicts Trump will win against Biden or Harris in 2024, and The New York Times gets mocked for declaring that gerrymandering is a 'tactic long used by the Republican Party'

A veteran television journalist accused CNN's Chris Cuomo on Friday of once sexually harassing her when they worked together at ABC News and she feels the "Cuomo Prime Time" namesake needs to "journalistically repent" for his behavior.

In a guest essay for the New York Times, former executive producer Shelley Ross outlined an incident where Cuomo, who came under fire this year for giving private advice to his brother New York Gov. Andrew Cuomo during his sexual harassment scandal, squeezed the cheek of her buttock without her permission in 2005. She also produced an email where Chris Cuomo appeared to admit to the incident and apologize for his behavior.

CNN'S CHRIS CUOMO ADDRESSES BROTHER'S RESIGNATION, DEFENDS HIS OWN CONDUCT AS ANCHOR: 'I NEVER MISLED ANYONE'

"At the time, I was the executive producer of an ABC entertainment special, but I was Mr. Cuomo’s executive producer at 'Primetime Live' just before that," she wrote. "I was at the party with my husband, who sat behind me on an ottoman sipping his Diet Coke as I spoke with work friends. When Mr. Cuomo entered the Upper West Side bar, he walked toward me and greeted me with a strong bear hug while lowering one hand to firmly grab and squeeze the cheek of my buttock."

A veteran television journalist accused CNN's Chris Cuomo on Friday of once sexually harassing her when they worked together at ABC News.

Ross said Cuomo told her, "I can do this now that you’re no longer my boss" and did it "with a kind of cocky arrogance." Ross said she told him he couldn't, pushed him off her and revealed her husband was right behind her, and they quickly left the party, which was celebrating an ABC colleague's departure.

Ross printed a copy of an email from Cuomo the same evening where he said he was "ashamed" of his behavior and even noted actor Christian Slater had been arrested for similar conduct.

CHRIS CUOMO AND HIS PROBLEMATIC YEAR AT CNN

"[T]hough my hearty greeting was a function of being glad to see you … christian slater got arrested for a (kind of) similar act, (though borne of an alleged negative intent, unlike my own)…and as a husband I can empathize with not liking to see my wife patted as such," he wrote.

Cuomo, who was 34 at the time of the alleged incident, asked Ross to pass along an apology to her "very good and noble husband," and also "I apologize to you as well, for even putting you in such a position." He added he would remember his lesson the next time he was happy to see her.

"Mr. Cuomo may say this is a sincere apology. I’ve always seen it as an attempt to provide himself with legal and moral coverage to evade accountability," Ross wrote.

CNN did not immediately respond to requests for comment. 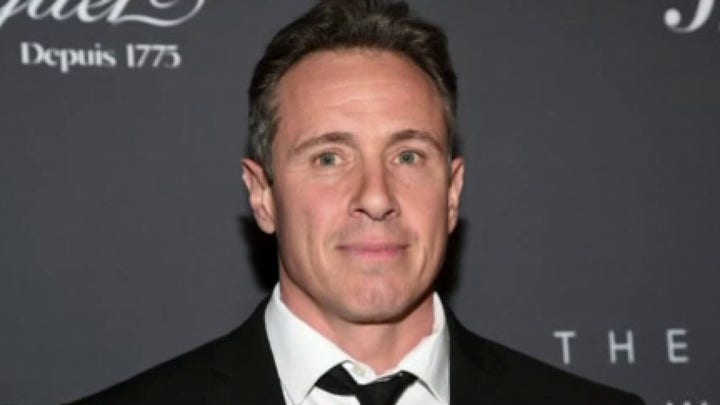 Ross wrote she didn't wish for Cuomo to be fired from CNN, where he's worked since 2013. However, she noted his rhetoric in March while addressing his brother's political scandal, where he claimed to care "very deeply about these issues." That day, Cuomo said he would not cover the harassment charges against his brother, after he was allowed to do friendly interviews with him at the outset of the coronavirus pandemic.

Two months later, the Washington Post reported that Chris Cuomo participated in strategy calls with Gov. Cuomo's top aides on how to address the harassment charges. Sources told the paper the younger Cuomo urged his brother to not step down and even invoked "cancel culture," a talking point the governor used back in March while engaging with reporters.

A report from New York Attorney General Letitia James would later note he was one of the trusted outside confidants whose commitment to protecting the governor contributed to Albany's "toxic" workplace culture. Gov. Cuomo resigned from office last month.

Between that, and an image of Chris Cuomo wearing a "Truth" t-shirt shortly after his brother's exit from office, Ross said she was compelled to speak out.

"For me, his statement of profound concern about sexual harassment and his ‘Truth’ T-shirt were provocations in this era of personal accountability," she wrote.

In a statement to the Times, Cuomo reiterated his apology to Ross while noting their interaction was "not sexual in nature."

"As Shelley acknowledges, our interaction was not sexual in nature. It happened 16 years ago in a public setting when she was a top executive at ABC. I apologized to her then, and I meant it," Cuomo said.

Cuomo did not immediately respond to a request for additional comment by Fox News.

While sexual misconduct accusations resulted in Andrew Cuomo stepping down as governor, Ross doesn’t want the younger sibling to lose his job. Instead, she hopes that he uses his platform to "journalistically repent" for his behavior.

"I’m not asking for Mr. Cuomo to become the next casualty in this continuing terrible story. I hope he stays at CNN forever if he chooses. I would, however, like to see him journalistically repent: agree on air to study the impact of sexism, harassment and gender bias in the workplace, including his own, and then report on it," Ross wrote. "He could host a series of live town hall meetings, with documentary footage, produced by women with expert consultants. Call it ‘The Continuing Education of Chris Cuomo’ and make this a watershed moment instead of another stain on the career of one more powerful male news anchor."

Cuomo has created negative headlines and bad publicity for CNN on a regular basis since the COVID pandemic began in 2020. He was widely mocked for conducting a series of playful interviews with his big brother at the height of the pandemic while the governor’s state was in crisis. The two of them would chide each other's looks, perform prop comedy and bicker over their affection for their mother, but the anchor would also give the governor a platform to tout his leadership amid the pandemic. The interviews occurred as critics scolded the CNN host for ignoring the state's COVID nursing home crisis before he finally lobbed a softball question about it after skipping it during multiple appearances.

Cuomo was previously barred from covering the New York governor, a rule that was apparently lifted by the network at the beginning of the pandemic and later implemented again as the Democrat became engulfed in a tsunami of political scandals.

Earlier this year, it was revealed that Chris Cuomo was a beneficiary of the Cuomo administration as he received prioritized COVID testing in the early months of the pandemic as ordinary New Yorkers struggled.

The younger Cuomo was diagnosed with the virus in March 2020. It is unknown if the positive COVID test he took was funded by himself, his employer or New York taxpayers.

Amid his recovery in April, he was caught breaking quarantine and was seen outside on another property in the Hamptons, which was in clear violation of his brother's COVID guidelines. That led to an altercation between the anchor and the bicyclist who called him out. The bicyclist later filed a police report. Also in April, the CNN anchor bizarrely staged his own re-emergence from the basement of his Hamptons home after his outdoor scuffle was widely reported.

In August, Cuomo noticeably ignored allegations against his brother on the air, raising questions about CNN's commitment to ethical journalism, before finally making a statement once Andrew Cuomo announced he would step down.