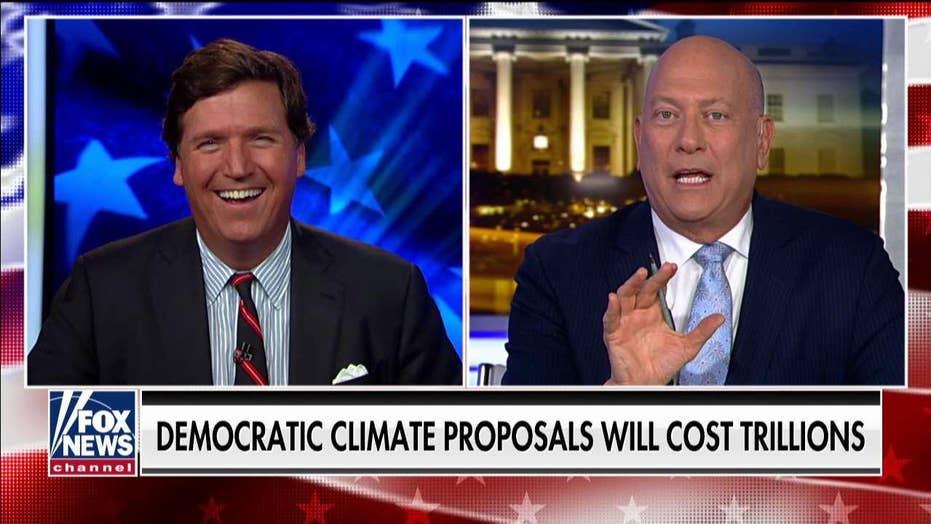 Tucker Carlson challenges former Clinton adviser Richard Goodstein to back up his points on climate change.

Following increased coverage of climate change in the wake of Hurricane Dorian, Fox News host Tucker Carlson challenged his Democratic guest to defend his environmental views Wednesday, and openly laughed at his response before calling it "insane."

Carlson was interviewing former Clinton adviser Richard Goodstein and asked him if spending trillions of dollars on a climate change initiative was a sound investment.

"[I'll] actually cite a Republican, Dick Cheney, who had the 1 percent doctrine which is if there is a 1 percent chance that a threat is going to effectuate, we have to treat it as a certainty," Goodstein replied.

Carlson laughed at the answer and said no one who supports climate change legislation uses facts to prove their claims. Instead, he said, they rely on emotion and intimidation.

"The basic precept of science is, don't tell me. Show me. Prove it," he said. "And no one bothers to do that. instead they throw slogans at you. They attack you. Nobody doubts the climate changes. It always has changed. The question is, is man causing it and can we stop it?"

Goodstein claimed the economy would drastically shrink if climate change was not addressed by the federal government. Carlson said it would be illogical to spend 80 percent of America's GDP on a politically driven climate plan.

"I wasn’t a math major at Harvard," he said, "but you're saying that worst-case scenario, climate change reduces the size of the U.S. economy by 10 percent by the end of the century. Bernie Sanders is proposing to spend 80 percent of the entire U.S. economy every year. How does this work?"

Goodstein shot back: "By the end of this century the U.S. economy will be about $100 trillion, not what it is now."

Carlson replied: "We don't know what the U.S. economy will look like at the end of the century. That's insane."

"If you really believe this, that this was such a massive existential problem, that you would take up the whole U.S. Economy to fight it, why the hell are you flying on private planes, seriously?" he asked.

"They're telling me that I have to change my whole life because this problem is existential but they're not changing their lives at all," he added. "They're hypocrites and liars. That's why."