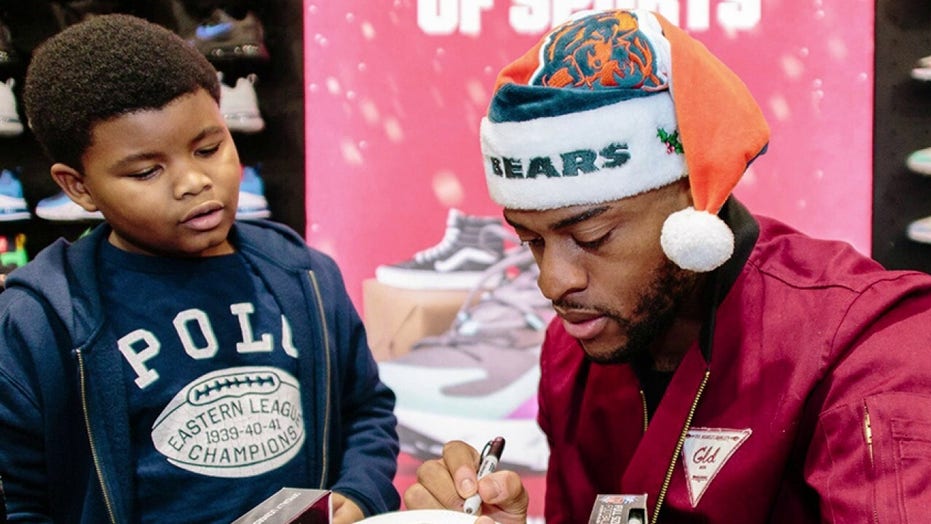 Allen Robinson speaks out about the charitable work he is doing; donate at givebox.com/519312

Chicago Bears wide receiver Allen Robinson is on a mission to feed children in struggling communities who have been affected the coronavirus pandemic.

The Detroit native joined "Your World" Tuesday, to discuss the work by his Within Reach Foundation to provide food and educational resources to children in low-income communities and ensure they are properly looked after.

"If you are hungry ... that can deter kids in a very negative way ... [and] send them to do a lot of things that they shouldn’t necessarily be doing just trying to feed themselves," Robinson said. "That goes for the children and also their parents as well. For us, this is an opportunity to be able to provide food to families. Our true mission is to impact as many families as possible."

"If you are hungry...that can deter kids...send them to do a lot of things that they shouldn’t necessarily be doing just trying to feed themselves."

Robinson explained that his foundation had shifted its focus to providing food to families affected by job losses and school closures hoping to "lessen the burden" as much as possible.

"This being a tough time, not only with the virus, but with people being laid off and different things like that, some people don’t have that same source of revenue they had a couple of weeks ago," he said. "There is so much going on right now as far as medically with doctors and nurses and them not having the proper protection, people being laid off and things like that.

"So, if we can just try to play a positive role in any of this, that’s what we want to do."

According to the foundation's website, $12 provides 20 pounds of food for an individual family. The $12 amount matches Robinson's jersey number.

Robinson's initial goal was to raise $12,000 from donors and match that amount. However, Bears coach Matt Nagy matched the amount himself, and offensive tackle Charles Leno contributed an additional $7,200, according to the Chicago Sun-Times.

Robinson said he was inspired to begin his foundation after he saw "the effects of kids not having the same opportunity as others" firsthand. He is focused on providing children with "an opportunity to be able to see outside the box, experience different things, have stuff to go back to school with, have a Christmas, and things to put under the Christmas tree."

Aside from his financial assistance, Robinson hopes to inspire children to dream big and serve as a role model to those in circumstances similar to his as a child.

"Just to have a person like themselves ... is very similar to them in the sense of having goals and dreams ... being able to talk them through that," he said.

"Again, me wanting to be a professional athlete at five, six years old was a pretty lofty dream. A lot of people didn’t believe in that. I just try to give another voice to kids as much as I can, just for them to believe in themselves whether that's school ... extracurricular activities and everything."

The Chicago Sun-Times contributed to this report.