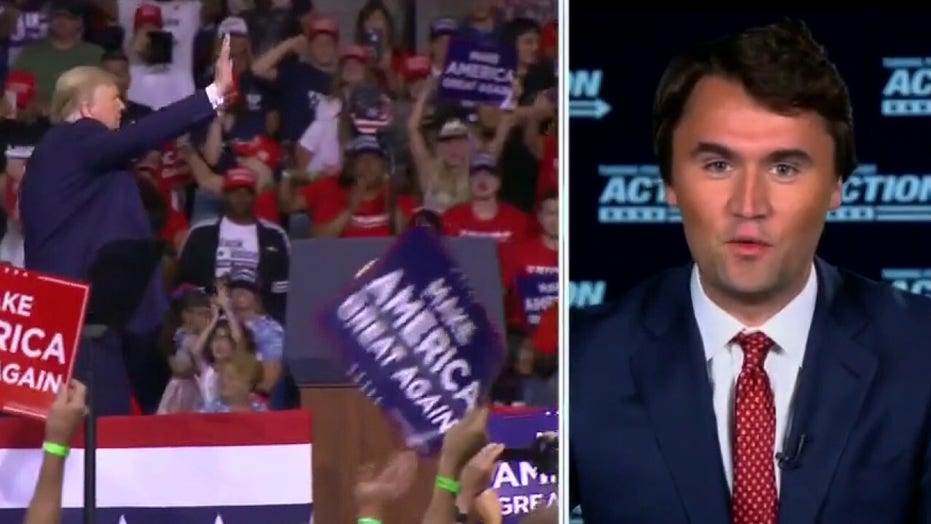 Charlie Kirk: So refreshing to see Trump back in front of his base

President Trump's rally in Tulsa, Okla., showed he's back on the offensive and "setting the tone" for the 2020 presidential election, Charlie Kirk, founder of Turning Point USA, said Saturday night.

"It's so refreshing to see the president back in front of his base," after weeks of coronavirus lockdowns, Kirk said on "Justice with Judge Jeanine."

"It's so refreshing to see the president back in front of his base."

"This was such an important distinction for the president to articulate -- the world view that he is fighting for and that his base supports, and the 63 million Americans who voted for him support ," Kirk said.

"One line really stuck out to me," Kirk continued. "He said, 'We stand on the shoulders of heroes.' Those are the heroes that the left and the Democrats and the anarchists in the streets are taking down -- those statues that [they] are taking down. You saw the statue of George Washington taken down yesterday."

Being in front of an enthusiastic crowd was a natural fit for Trump, Kirk added.

"The president seemed right where he belonged. He had great energy, great spirit," Kirk said. "And I think finally he's back on offense, putting the Democrats on defense."

"The president seemed right where he belonged. He had great energy, great spirit. And I think finally he's back on offense, putting the Democrats on defense."

Trump roared back before thousands of supporters using the fiery and freewheeling appearance at Tulsa's BOK Center to mock presumptive Democratic nominee Joe Biden, criticize those tearing down monuments of historical figures and decry what he described as the “disaster” demonstration in Seattle.

Kirk wished Biden "good luck," saying the former vice president's campaign was in a "crisis" because the candidate now has to campaign in public after appearing mostly online because of the pandemic.

In contrast, Kirk said, "you can see the president. He was getting more and more into it as the speech went on. And it's phenomenal to see. And the Biden campaign? Good luck."

"I don't even know what campaigning looks like for Joe Biden," Kirk added. "But the president was spot on with his critique of Joe Biden. And it's just the beginning."

"I don't even know what campaigning looks like for Joe Biden. But the president was spot on with his critique of Joe Biden. And it's just the beginning."

Kirk also praised the president for "diving" into the "cultural war."

"You have record amount of cancelations, a record amount of silencing happen on digital and social media. And the president realizes that politics flows downstream from culture and that it's time to stand for our beautiful history, the heroes that built America. And if you're watching this right now and you feel like America's heading in just a troubling direction the last couple of weeks, the president [is] saying, 'No more,'" Kirk said.

"And the fact that he talked about the Second Amendment rights, the Constitution, free speech -- these are winning issues. And again, the president is probably the best offensive player in modern American history. And when he's playing offense, he's setting the tone. The media doesn't know how to cover it."