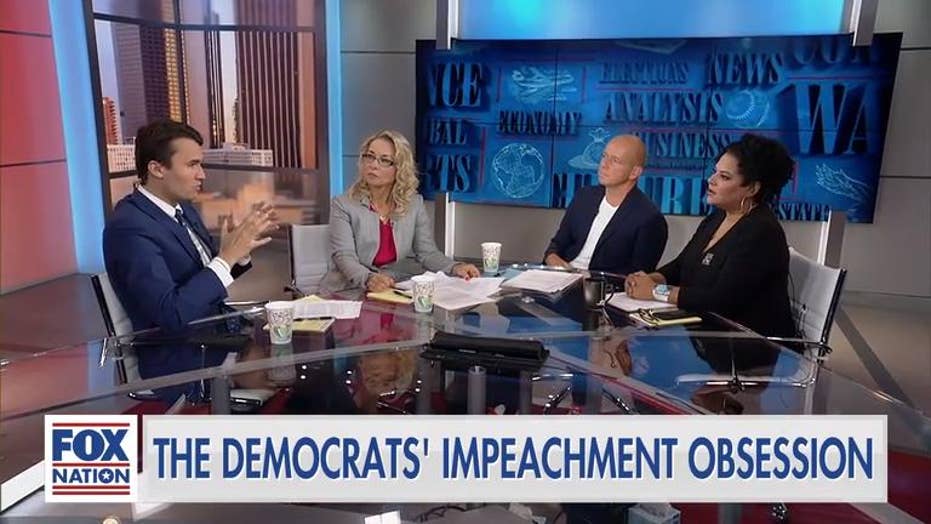 Charlie Kirk questions impeachment timeline: Democrats had it 'circled on their calendar' months ago

Turning Point USA founder Charlie Kirk broke down his thoughts on the latest in the impeachment investigation as public hearings are set to resume later this week.

"It's all artificial, it's all astroturf, it's all vapor," Kirk said. "This is so shallow... there's nothing here and enough people are realizing it."

Joining a panel of guests, Kirk appeared on Fox Nation's "Deep Dive" to discuss a recent letter sent by President Trump's attorney Pat Cipollone who blamed House Judiciary Committee Chairman Rep. Jerry Nadler, D- N.Y., for inviting Trump to participate in his committee's first impeachment hearing on Wednesday, when Trump is scheduled to be overseas at the NATO Summit in London.

Accusing the Democrats of grasping at straws in an effort to defeat Trump, Kirk said they went into "crisis mode" when the much-awaited Russia investigation into 2016 election interference didn't incriminate the president as they had hoped.

"A year ago, midterms are coming up...they win the midterms. I believe they had circled on their calendar 'impeachment: July, August,'" Kirk said.

"And they thought it was going to be the Mueller formula," he added, referring to former Special Counsel Robert Mueller who conducted the Russia investigation. "And then -- slowly but surely -- through very strategic leaks, they realized they got nothing ... and they kind of go into a little bit of crisis mode," Kirk said.

"Two days after Mueller, the whistleblower submits his complaint, President Trump has the phone call ... and so, they had this planned," he explained.

Doubling down in his criticism of the Democrats' impeachment efforts, Kirk said their disdain for Trump extended to the American people, and that Trump acts as a "communication vessel for a country they actually despise."

"They have total contempt for the people, they really do," Kirk said.

"They look at elections as almost like a distraction, like a hindrance ... like just as a roadblock or like 'we have to deal with this. We're smart, we went to Harvard. We're smarter than you ... let us be the philosopher kings. We can do this,'" said Kirk.

"They say 'we're gonna get the right bureaucrats and technocrats in a room and we'll get paid a bunch of money,'" Kirk continued, "and you citizens that go to Wal-Mart and own guns and go to church...[they] have total contempt for you."

Townhall columnist, political activist and former Democrat Kira Davis echoed Kirk's remarks in the Fox Nation episode and blamed the "elitist" mindset of Democrats for driving her out of their party.

"They are angry at us, and that's I think, to me, what I find most insulting," Davis said.

"I left the left because...I'm a Midwestern girl and that's really the heart of this country...so many good people there. And on the left, that's just flyover country," she said.

"And there's this attitude that's like 'these people don't know enough to tell what's good for them,'" she added.

"I would just like to say," Founder of 'For Kids and Country' Rebecca Friedrichs cut in, "on behalf of the American people, would you please just let my president do his job? It's such a waste of time, really, and a waste of taxpayer resources."

Asked about the effect the impeachment investigation will have on the 2020 election, Davis said she believes the electorate will "wake up" in support of Trump.

"When we think the American electorate is asleep, that's when they pop up like, 'oh, hell no, we weren't. No, no, no, no. Not on our watch.' But at the end of the day, Americans are not as dumb as people would have you believe. Most Americans are just living their lives without time for all of this," she said.

"The United States, we actually put someone in who wasn't supposed to be president," Kirk responded.

"[Someone] who beat the media elites, beat Hillary Clinton, beat the DNC, beat the Bush elites, beat the Republican elites, was down in the polls and won in one of the most unconventional way imaginable. Good for our system. But what he represents, what the working class people see in him, they see him as their vessel, their daily representative...he's going on his grind.... and the Democrats every day, through this impeachment sham are trying to push back against it."

To hear Kirk's full remarks and for more from the "Deep Dive" guests, join Fox Nation and watch the latest episode today.