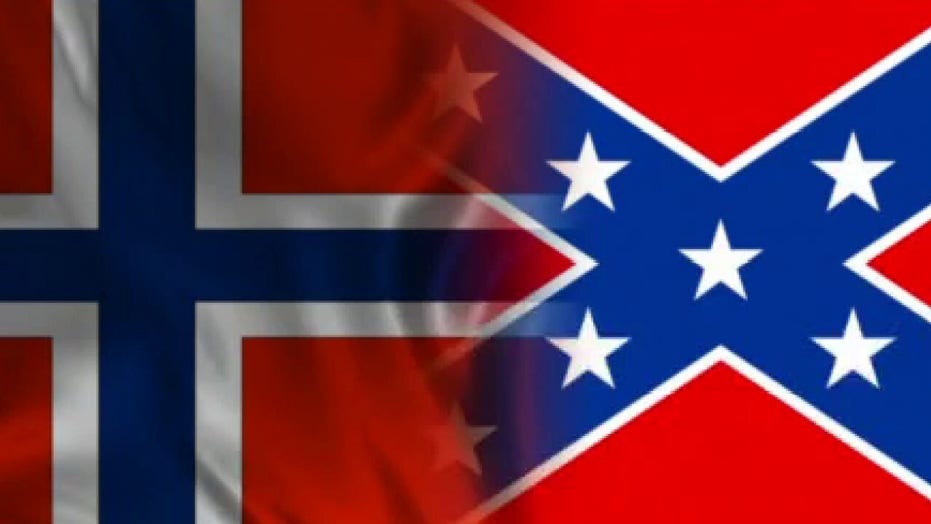 George's comments during an interview on "Fox News @ Night" came following a Michigan bed and breakfast's decision to remove their Norwegian flag after dozens wrongly accused the owners of flying a Confederate flag.

According to reporting from WLIX, when Greg and Kjersten Offbecker created the St. Johns inn -- named The Nordic Pineapple -- they installed the flag, hanging an American flag alongside it.

The pair then began to receive cruel emails and phone calls. Some were even convinced that the "B&B" was built by Confederate leaders when, in fact, union workers constructed the Civil War-era building for the daughter of the Saint Johns founder.

Kjersten Offbecker said the flag was hung as a way for her to represent her Scandinavian heritage. However, with the confusion, she took it down because she said it was not worth the frustration.

"It's a combination of a very bad attitude and a great deal of ignorance," George remarked. "You would think that Americans would be able to tell what is and isn't a Confederate flag -- even if it's a flag that, in some ways, resembles a Confederate flag.

"But, look at how quickly people just turn to outrage and tried to shut these people down because they thought they had broken the rule against wrongthink..." he told host Shannon Bream. "So, the combination of malice and ignorance is really toxic."

George highlighted the importance of speaking up in defense of the free speech rights of those you strongly may disagree with.

"Temple University was under pressure to discipline [Professor] Marc Lamont Hill for some statements that I very strongly disagreed with. But I, nevertheless, threatened to myself lead a protest...in defense of the free speech rights of the very progressive Marc Lamont Hill," he explained. "Because he has every bit of [a right to] free speech as I have or as anybody else has.

"The First Amendment is for all of us," George pointed out.

Fox News' Jack Durschlag and The Associated Press contributed to this report.