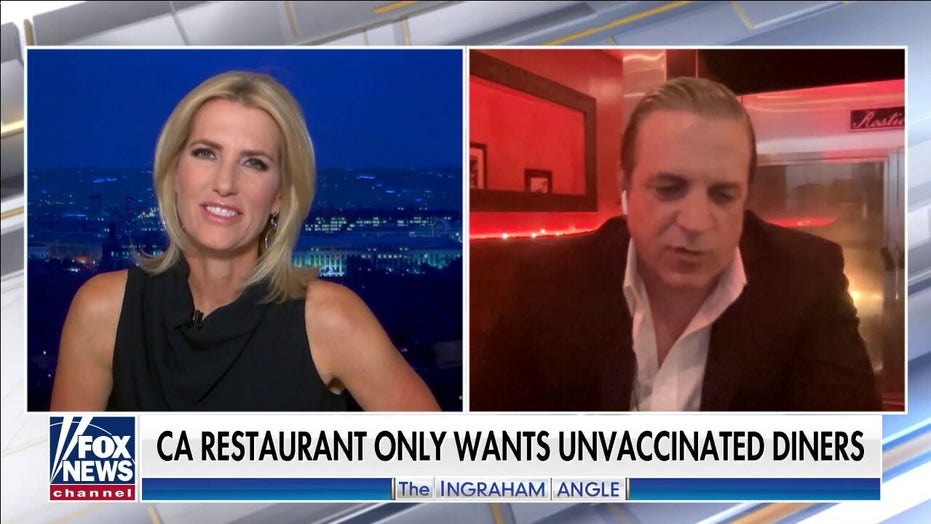 Tony Roman, owner of California restaurant Basilico's, on the 'hate' he has received for pushing back on mask mandates and vaccination requirements, and his interview on CNN with Chris Cuomo.

A California restaurant owner called out CNN anchor Chris Cuomo during Wednesday night's "Cuomo Prime Time" for breaking his quarantine back in 2020.

Cuomo had invited restaurant owner Tony Roman to speak about his new policy for customers to show "proof of being un-vaccinated" to eat at his restaurant.

"More American counties, cities, and businesses doubling down on anti-American lockdown mandates? Well 'Basilico's Pasta e Vino' just tripled down: From day one, never complied, banned masks, and now...requiring proof of being Un-vaccinated!" Roman wrote on his restaurant Facebook page. In 2020, he also promoted an anti-mask policy, refusing to allow his employees and customers to wear masks in his business.

Cuomo objected to Roman’s policies and immediately attacked his logic, only for Roman to call out Cuomo's own hypocrisy when it comes to following COVID-19 restrictions.

CALIFORNIA RESTAURANT SAYS IT WILL SERVE ONLY VACCINATED CUSTOMERS

"The whole reason this is happening is because people won’t protect themselves. I mean, what are you thinking?" Cuomo asked.

"Then why did you leave your house when you had COVID? I mean, you had it, and you left your house. It’s been documented," Roman replied.

"I quarantined. I went out. My wife got accosted by somebody," Cuomo argued.

This was in reference to the incident of an East Hampton, New York, bicyclist, who saw Cuomo breaking quarantine outside his home. The bicyclist later filed a police report after Cuomo derided him on a radio show saying "I don’t want some jackass, loser, fat tire biker being able to pull over and get in my space and talk bulls--- to me, I don’t want to hear it."

Despite this report, CNN showcased a video of Cuomo’s "re-entry" into society following his quarantine. "Alright, here it is... the official re-entry from the basement, cleared by the CDC," Cuomo narrated as he was leaving the basement of his home in the Hamptons. "This is what I've been dreaming of, literally, for weeks."

The video was widely panned and since then Cuomo has been frequently called out on his hypocrisy.

"Maybe we should ask your brother about protecting people. That’s a whole new can of worms," Roman added.

Cuomo shrugged off the insult claiming "That’s his job, and if he doesn’t do it well, people won’t vote for him."

Governor Cuomo currently faces an investigation by federal prosecutors for his policy of forcing nursing homes to accept patients who tested positive for COVID-19, leading to the deaths of thousands of vulnerable senior citizens, and allegations that his administration tried to coverup the number of deaths.

"Honestly, you sound like an idiot," Cuomo told Roman.

"Problem: we have 25%- ~35% of adults vibing on this pro-virus politics. Screwing the vaccinated...a coalition of the conscientious, reasonable folks from right and left, red and blue...they are now joined in efforts to not get sick," he added. "not weird. Not off the rails - thats media yap. there are too many who think like this guy, that being unprotected is a show of strength...what about the freedom of those in the majority - right left red blue...who are vaccinated? Aren't they the victims?"

"He was free not to take the money, right? Look - the point is taking the vaccine should be about protection not politics. Talk to your doctor and if more get vaccinated we can salvage the fall. The vaccinated dont deserve the downside of irrational resistance."