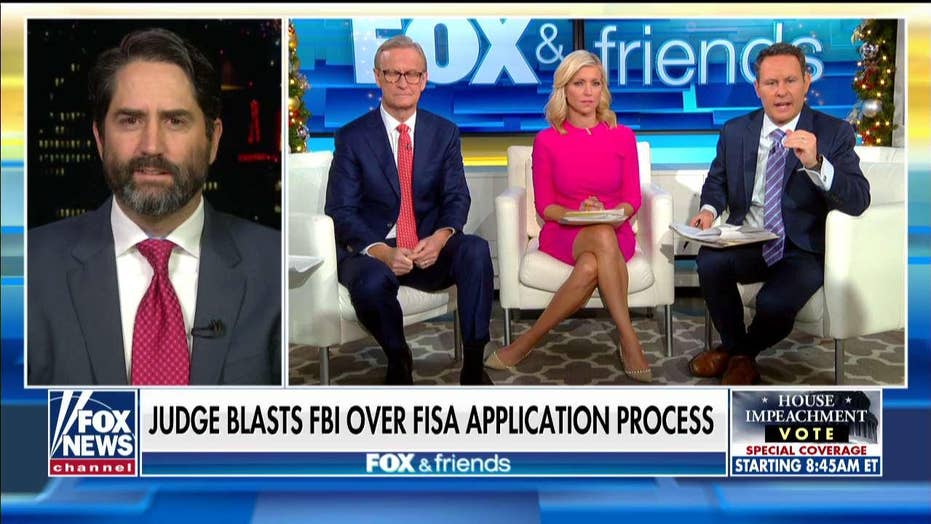 Americans should be alarmed about how the FBI obtained surveillance warrants during the 2016 launch of the Trump-Russia investigation, former federal prosecutor Brett Tolman said Wednesday on "Fox & Friends," as he questioned whether the probe ever should have been launched in the first place.

Tolman weighed in after the chief judge of the Foreign Intelligence Surveillance Court [FISC] issued a rare public order Tuesday that strongly criticized the FBI over its surveillance-application process. The judge gave the bureau until Jan. 10 to come up with solutions in the wake of findings from Justice Department Inspector General Michael E. Horowitz.

"It is unprecedented, but it's also alarming because these are judges that are accustomed to not really being known or identified. Let alone coming out publicly and bracing an agency that they are not approving of their conduct," said Tolman, who served as U.S. attorney in Utah from 2006 to 2009. "This was something, for those of us that have been around the FISA court. Isent chills up and down our spine as we realize how serious and the gravity and the intensity with which this is being approached on the inside. This is really the story right now in Washington, D.C."

The order, from the court's presiding judge, Rosemary M. Collyer, came just a week after the release of Horowitz's withering report about the wiretapping of Carter Page, a former campaign adviser to President Trump.

"The FBI's handling of the Carter Page applications, as portrayed in the [Office of Inspector General] report, was antithetical to the heightened duty of candor described above," Collyer wrote in her four-page order. "The frequency with which representations made by FBI personnel turned out to be unsupported or contradicted by information in their possession, and with which they withheld information detrimental to their case, calls into question whether information contained in other FBI applications is reliable."

The FBI said it would cooperate with the judge's order and make improvements that go beyond her requests.

"As [FBI Director Christopher Wray] has stated, the inspector general’s report describes conduct by certain FBI employees that is unacceptable and unrepresentative of the FBI as an institution," the bureau responded in a statement Tuesday night. "The director has ordered more than 40 corrective steps to address the report’s recommendations, including some improvements beyond those recommended by the IG."

Tolman, formerly a clerk for a FISA court judge, said the Horowitz report and Collyer's order makes him doubt whether the investigation, which was eventually handed over to Special Counsel Robert Mueller, should have been pursued.

"They shouldn't have launched it. And keep in mind, [James] Comey is the one who drives to get Mueller appointed as a special prosecutor. It's not just outrageous, it's a violation of the integrity of the greatest and most powerful system we have in this country and I'm offended by what occurred," he added.

"It's not sloppiness. This is misrepresentations that were driven by hatred of a target you're investigating at the highest level of the FBI," he said.