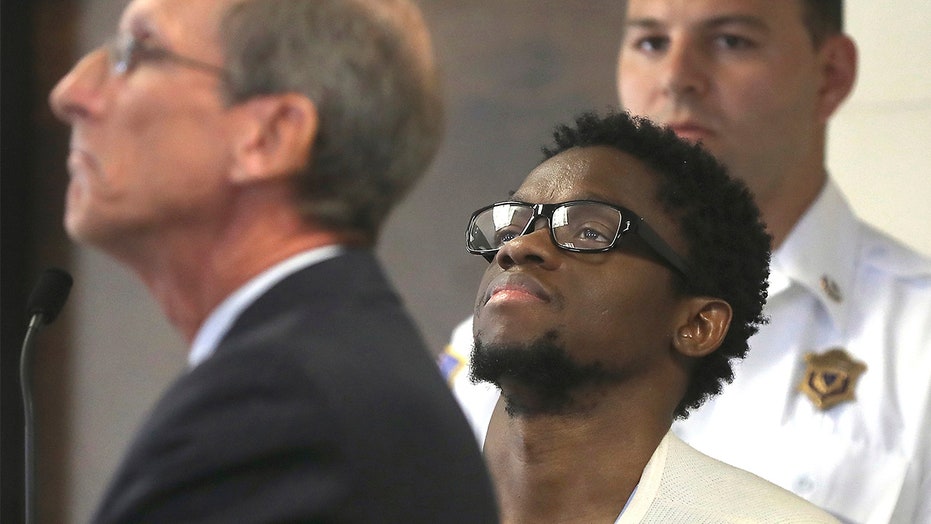 The concierge who was convicted on two counts of first-degree murder in the death of two Boston anesthesiologists had two outbursts while in court Tuesday, when he menaced the prosecutor's wife and then threatened to share the last words of one of his victims, a report said.

Bampumim Teixeira, 33, was convicted of killing Dr. Lina Bolanos and her fiance, Dr. Richard Field. The two doctors were found dead in their penthouse in May 2017. They were in handcuffs and their throats were slit.

Teixeira was physically removed from the courtroom twice. He threatened the prosector's wife and then, upon his return, shouted out a second time about the death of his victim. "Want to know his last words?" he yelled, referring to Dr. Field.

"A dozen officers hauled him away," one reporter tweeted. "The doctor’s family is sobbing. Recess now, we are waiting for jury to arrive with verdict."

Teixeira initially claimed he was in the building because he was having an affair with Bolanos. He said Field came home and snapped into a jealous rage before killing Bolanos, after discovering the two had been cheating behind his back. Teixeira then killed Field in self-defense, he claimed.

Prosecutors refuted this theory and accused him of using his knowledge as a former concierge in the building to track the couple's movements and gain entry into their apartment.

Jurors sided with the prosecution and delivered a prompt guilty verdict, the day after they had begun deliberations. The jury also found Teixeira guilty of home invasion, armed robbery and kidnapping, according to The Boston Globe.

Field had arrived home an hour and a half after his fiancee and sent a text message to a friend saying there was a "gunman in the house," but was unable to call for help in time.

After police arrived, they opened fire on Teixeira, who was wounded in the hand, leg and abdomen before being taken into custody. When he was interviewed the next day, he claimed he had been involved in a two-month affair with Bolanos and alleged that she was being physically abused by Field.

Local reports said Teixeira told police he was wearing gloves because he was cold, and that he had about $850 to $900 in cash on him because he was homeless and staying at a shelter.

On Thursday, medical examiner Dr. Richard Atkinson testified that the blood of the victims was found on several pieces of evidence and said Field was stabbed on the right side of his neck, while Bolanos had 24 sharp-force injuries on her neck and jugular vein.

Teixeira is scheduled to be sentenced on Friday in Suffolk Superior Court.