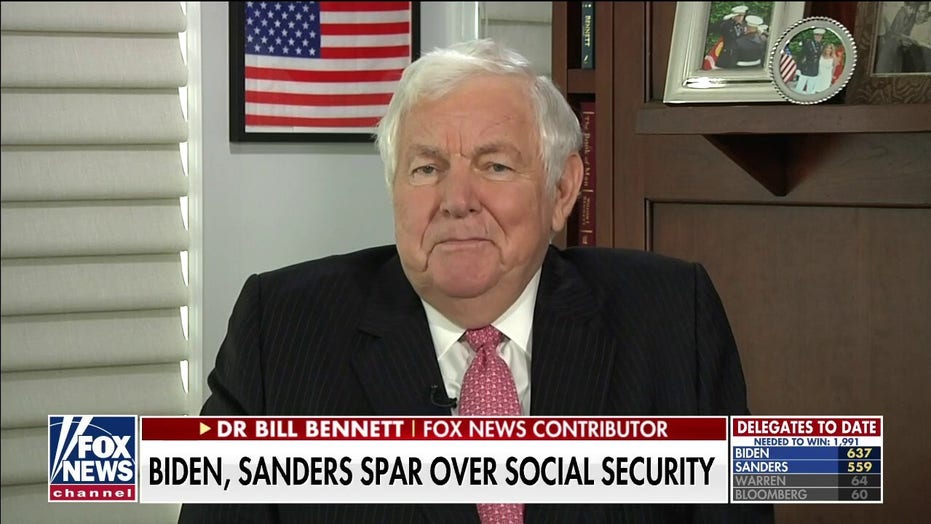 Bill Bennett: Dems could have buyer's remorse when Biden gets on debate stage

After former Vice President Joe Biden and Sen. Bernie Sanders sparred over social security policy, Dr. Bill Bennett weighed in on Friday, suggesting that Biden may not withstand the scrutiny into his past as a moderate Democrat.

“Will there be buyer's remorse about Biden now that people sort of fled Bernie in a panic over socialism and communism, as the president would say,” Bennett told “America’s Newsroom.”

“Will there now be buyer's remorse as they watch under the glare and scrutiny,” Bennet said.

Biden and Sanders feuded on Twitter about Social Security as the two Democratic presidential hopefuls prepare for the next round of primaries on Tuesday.

After Biden won 10 states on March 3, Super Tuesday, securing a solid delegate lead and resurrecting his 2020 campaign, Sanders revived his criticism of the former vice president for his remarks in 1995 advocating freezing federal spending for Social Security, Medicare and Medicaid.

On Thursday, Biden shared a video of President Trump admitting during a Fox News town hall that “we’ll be cutting” entitlements.

“Social Security is on the ballot this year, and the choice couldn’t be clearer,” Biden wrote. “I’ll protect and expand it. Donald Trump will cut it and take it away.”

“Here's the deal,” he wrote. “Joe Biden has repeatedly advocated for cuts to Social Security. I've fought my whole career to protect and expand it.”

Biden fired back, criticizing Sanders for attacking a fellow Democrat instead of Trump. Both candidates are currently vying for top billing on their party’s ticket against the incumbent Trump in the November general election.

“Maybe you should spend your time attacking him,” Biden wrote.

Although Biden has called for expanding Social Security and paying for it by imposing taxes on the wealthy, that’s a marked shift from his time in the Senate, when he and other moderate Democrats flirted with the possibility of either cutting benefits or increasing the retirement age. Biden’s comments at the time are frequently used in attack ads launched by Sanders’ campaign.