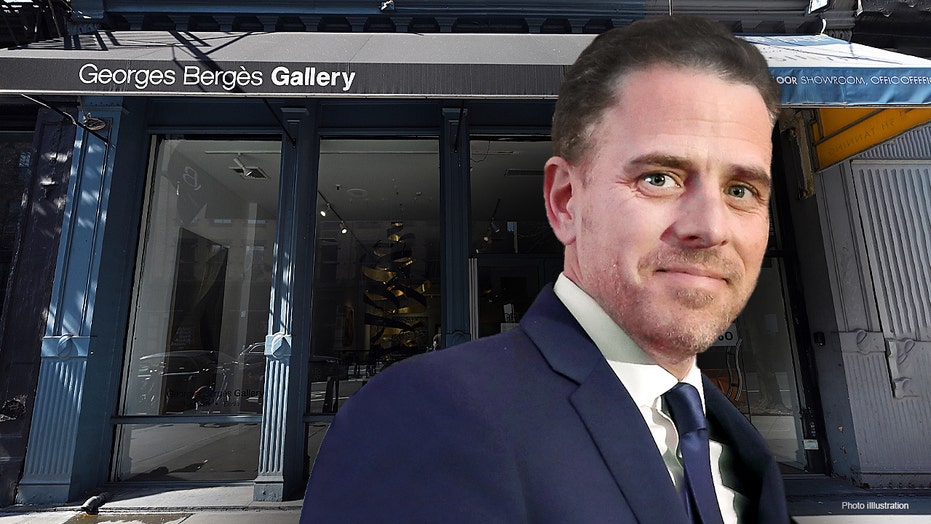 A violent crime wave has gripped major cities across America after months of the mainstream media downplaying a spike in violence, falsely declaring sometimes-vicious protests as peaceful and ignoring lawlessness that doesn’t fit their agenda, according to critics who don’t think the press is doing any favors for some of the biggest cities in the United States.

"The lack of national corporate media coverage of the spike in violent crimes does a disservice to people in cities who are the victims, and contributes to the downward spiral," Jacobson continued. "That these cities almost entirely have progressive mayors suggests some of the lack of coverage is politically motivated."

A recent poll found that citizens overwhelmingly care more about public safety than topics like race relations and police reform, but the mainstream media regularly ignores public safety-related news. Grabien Media founder Tom Elliott feels that "all reporters, whether they admit it or not, are biased" and one of the most egregious ways bias impacts reporting is when news judgment affects journalists’ opinions of themselves.

"Journalists love stories where they’re the good guys while usually ignoring the ones where they’re in any way culpable," Elliot told Fox News. "What’s happening in American cities — particularly the ones where the George Floyd riots were the most violent — with crime and gang violence spiraling out of control, is largely being ignored for exactly this reason: it’s not a narrative that neatly fits into their usual ‘we’re the good guys here’ framework."

Elliott noted that corporate media has spent the last year "irresponsibly hyping" racial conflict and anti-police narratives, so news consumers shouldn’t be surprised that "cops are quitting en masse and cities are returning to the bad old days" of widespread crime.

"When the media have made mention of the mayhem, they’ve attempted the neat trick of describing gang violence as ‘mass shootings,’ so as to least squeeze some anti-gun rights nectar from the fruits of their irresponsibility," Elliott said. "Meanwhile, in cities like Chicago, far more young inner-city lives are being lost to crime than to COVID, the media’s preferred preoccupation."

Political pundit and radio host Tim Young said the public needs to be fully aware of the spikes in violence and crime in major cities in order for local officials to be held accountable.

"We're constantly warned of misinformation in the media about COVID, I see no difference between that and the left with their corporate media friends intentionally ignoring crime and violence for political purposes," Young told Fox News. "Both bring great harm to Americans. Pretending things aren’t bad in major cities is disinformation, right? That's how the left's rules work."

Chicago authorities on Monday said that 70 people were shot and 12 were killed amid another violent weekend in the city. This came after at least 11 people were killed, and 56 shot were shot last weekend, too.

But Chicago isn’t the only Democrat-run city plagued with issues that are largely ignored by the media. 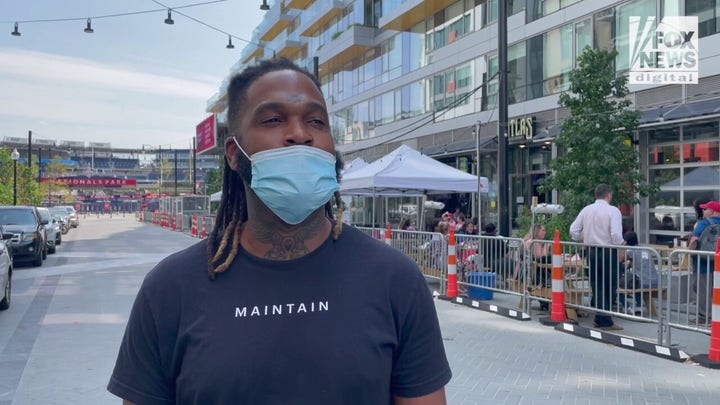 New York City's once-beautiful Washington Square Park is succumbing to urban decay. According to the latest available crime data from the New York Police Department's 6th Precinct, which includes Washington Square Park, rapes, murders and felony assaults are up 66.7%, 41.5% and 11.6% year-to-date, respectively. Burglaries and grand larceny are up 87.5% and 27.1%, respectively, within the past month.

New York City residents read about brutal attacks in broad daylight, shootings and other chaos in local newspapers on a seemingly regular basis but it rarely gets addressed by the national media.

Washington, D.C. has been overwhelmed by crime of late, but the mainstream media didn’t pay attention until shootings occurred outside a Washington Nationals baseball game and down the block from a posh eatery.

CNN’s Jim Acosta was mocked for name-dropping the name of the restaurant he was eating at when the gunfire erupted nearby when he called into Anderson Cooper’s show to discuss the ordeal last week. On "The Five," Greg Gutfeld contrasted that coverage with CNN hosts Don Lemon and Christopher Cuomo mocking "conservative media" for allegedly unnecessarily filling their news hole with crime stories.

"You would think entire cities are just, you know, enthralled in fights, fires, and whatever," Lemon told Cuomo in a previous discussion.

Gutfeld said the contrast therein showed that the network has "covered-up" the true intensity of the crime rate in the nation's cities.

"I don't know if you can find a larger a-- than Jim Acosta. CNN has been engaging in a cover-up of violent crime for quite a while," Fox News’ Gutfeld said.

"They did it for political reasons. They did it because they wanted Biden in," Gutfeld continued. "Those two clowns Cuomo and Lemon were mocking people who were concerned. They were laughing about it."

Gutfeld compared that dynamic to a 2020 controversy involving former ESPN sports reporter Chris Palmer, who remarked "burn that s--t down" in reference to the riots following the death of George Floyd. Palmer's tone notably changed when violent protesters showed up in his Los Angeles community, to which he tweeted "get these animals out of my neighborhood." 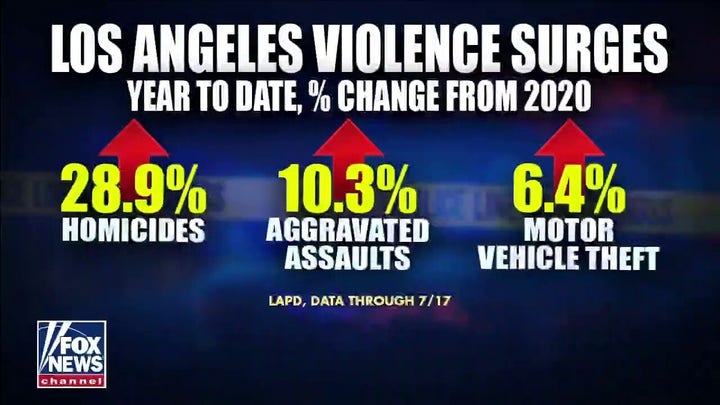 "Remember the guy … on Twitter, an ESPN reporter or a contributor who tweeted ‘burn it down' until the riots got to him and breached his community. And what did he do? He called 911," said Gutfeld.

"I said this at the table awhile ago: It is not until the crime affects the national media that they will make it a national story. Until then, it is a local story. To Acosta's point, it is only of interest because they can put themselves into the story. It is an ego-driven story," he said. "It's now at the restaurants where they dine."

Many compared that now-infamous on-air CNN moment to another in 2020 when anchor MSNBC Ali Velshi told viewers that the situation was not "'generally speaking unruly" while standing in front of a burning building.

Conservative blogger "Grizzly Joe," a former NYPD officer, thinks the media is failing American cities and the people who live in them.

'UNAPOLOGETIC' LIGHTFOOT DEFENDS SPEAKING ONLY TO REPORTERS OF COLOR: 'I WOULD ABSOLUTELY DO IT AGAIN'

"A drive-by shooting in a ‘safe’ Washington DC restaurant district or a shooting that happens to occur right outside a major-league baseball game saturates the news cycle for a day or two because it impacts folks not used to being exposed to such criminal events, the people who live in so-called ‘safe’ neighborhoods in the city or suburb," Grizzly Joe told Fox News. "That these very same crimes occur with unfortunate regularity in many inner city neighborhoods without hysterical breathless media coverage implies that criminal acts are expected and acceptable in some places and not others."

He feels the modern, internet-driven news environment collectively covers topics it feels Americans want to hear about, as opposed to what they need to hear.

"Thusly, to the extent the media comes up short in its reportage of big-city crime spikes it is only because that is how click-driven media interprets what we want to know about, the juicy headlines that will drive clicks," Grizzly Joe continued. "If the entirety of American society knew how less fortunate people live in economically depressed neighborhoods, there would be a collective insistence to fix the problems that drive crime generally and the recent crime spikes specifically. We would surely still argue over liberal & conservative approaches to crime, but I have to believe that there would be a collective agreement to meet somewhere in the middle in a desire to improve the lives of folks in economically unfortunate inner city neighborhoods."

The conservative blogger noted that "the criminal element in these neighborhoods are a relatively small percentage of the citizenry" but the press should cover the bad apples in order to make cities safer for everyone else.

"It is for the benefit of the overwhelmingly law abiding folks that mainstream media must take a more nuanced approach to reporting on crime spikes and ‘normal’ crime statistics," Grizzly Joe said.

Notably, recent polling out of Detroit suggested that the media is out of touch with Americans and their public safety concerns. "By an overwhelming 9-1, they would feel safer with more cops on the street, not fewer," the USA TODAY/Suffolk University/Detroit Free Press Poll found after surveying Detroit residents. Journalist Glenn Greenwald shared the "staggering" statistic, concluding that there is a "wide" gap "between the discourse of media elites on these questions and everyone else."

Media Research Center vice president Dan Gainor feels the media has failed American cities and citizens for decades but things have gotten worse as violence in Democrat-run cities has increased.

"Journalists have always done a horrendous job covering groups they don’t belong to — from communities of color to Christians to conservatives. They do a similarly horrible job hiring from those groups," Gainor told Fox News.

"But the news media are so leftist that they refuse to call out the liberal mayors of cities for spikes in violent crime. And they refuse to report on stories like the D.C. carjacking that killed a Muslim immigrant because the killers didn’t fit the narrative," Gainor continued. "The only time the media make a big deal of crimes now is when the felon is a white male."