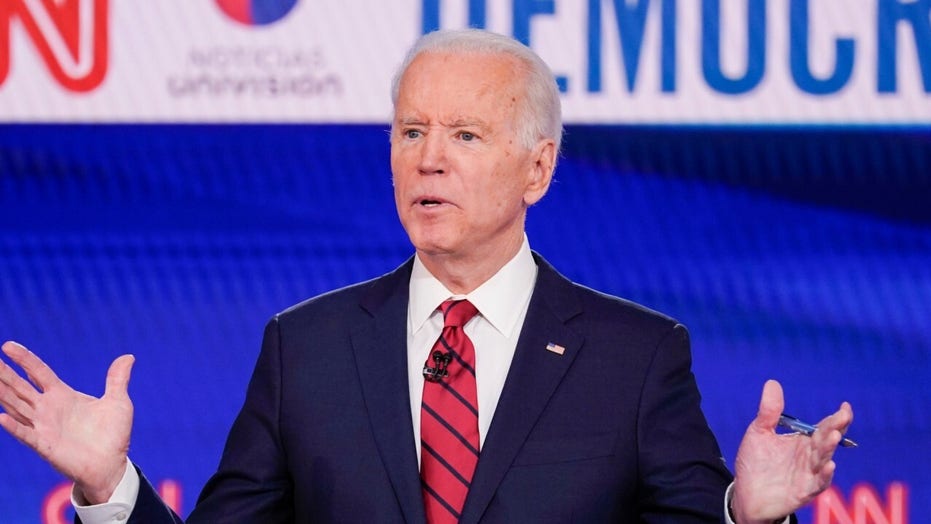 Joe Biden has had a gaffe-filled week in his return to the spotlight after being oddly invisible the previous week amid the coronavirus pandemic, with his hastily arranged comeback blitz driving an onslaught of negative publicity.

“Over the past 48 hours, he has shown up several times -- in his own live-streamed statement, on ‘The View,’ on MSNBC and CNN. It did not go well,” Fourth Watch editor Steve Krakauer wrote. “Look, I think we as a society should respect our elders. But there's just something wrong with Joe Biden.”

It started Monday with widely panned remarks on the coronavirus, featuring the 2020 Democratic front-runner appearing to lose his train of thought when his teleprompter malfunctioned.

BIDEN MOCKED AFTER APPARENT TELEPROMPTER ISSUE DURING CORONAVIRUS REMARKS: ‘LET ME GO TO THE SECOND THING’

The livestream began with Biden touching his face despite ongoing warnings not to do that during the coronavirus pandemic—but this would a reoccurring blunder for the former vice president.

Biden then attempted to detail his plan to fight the coronavirus crisis, but appeared to lose track of his place on the teleprompter and signaled to his staff that there was something wrong, before going off on an uncomfortable ad-lib.

Biden was back at it on Tuesday, first with an appearance on “The View,” and he touched his face so many times that social media guru Caleb Hull put together a compilation.

Biden wasn’t only criticized for touching his face on “The View,” as he was also accused of giving an incoherent answer when co-host Sara Haines asked if businesses should reopen in the near future.

“We have to take care of the cure, that will make the problem worse, no matter what,” Biden responded, sparking confusion and criticism on social media.

“It’s truly incomprehensible how completely confused and befuddled he seems. The only chance Joe Biden has is if he is quarantined for the next six months,” Barron told Fox News.

Even far-left activist Shaun King was surprised by what he saw.

“I repeatedly said that it was unthinkable that @JoeBiden was not on television,” King wrote. “I change my mind. I now understand why they didn't put him on TV.”

Later in the day Biden appeared on CNN and was lectured by anchor Jake Tapper about how to properly cough during an on-air interview.

Biden was discussing the latest on combating the pandemic from his home when it was interrupted by a cough.

"Excuse me," Biden said after he coughed into his hand.

"You know, you're supposed to cough into your elbow," Tapper told the former vice president as he himself demonstrated with his elbow. "I learned that, actually, covering your White House."

"Actually, that's true," Biden conceded. "But fortunately, I'm alone in my home, but that's OK. I agree, you're right."

CORONAVIRUS OUTBREAK: HOW SENIORS CAN GET HELP WITH GROCERIES, MEALS, MEDICINE

The CNN anchor, however, doubled down on the proper etiquette lesson.

"It's kinda just old school to do it with your hand," Tapper added while demonstrating with his elbow again. "Do it into your elbow."

The most uncomfortable moment of the week for Biden was arguably an appearance on MSNBC when he appeared to lose his train of thought, again, and even apologized for it during an interview with Nicolle Wallace.

“Why doesn’t [Trump] just act like a president? That’s a stupid way to say it… I really wish he. Sorry,” Biden said as Wallace urged him to finish making his point.

HOW TO HELP YOUR COMMUNITY DURING THE ONGOING CORONAVIRUS PANDEMIC

Biden also made Wallace awkwardly smile when he compared Trump to a yo-yo before interrupting himself.

“I shouldn’t have said it that way,” Biden said.

By Tuesday evening, montages of Biden’s bloopers began to circulate on social media.

By Wednesday morning the Internet was filled with negative headlines about the Democratic presidential hopeful. The Daily Caller accused him of “pushing misinformation” about the coronavirus and Deadline wrote, “Joe Biden Gaffe Alert: Stuns ‘The View’ By Claiming Coronavirus Cure Will Make The Problem Worse.”

“Some Democrats have privately told Biden that he has to improve,” the Washington Post reported.

The Los Angeles Times wrote that Biden is “struggling to find a message that gets him back on voters’ radar,” while The Federalist wrote that Biden “seems to have finally given up on sounding articulate.”

“Democrats need little from the front-runner beyond his corporeal presence,” Wagner’s article states directly in the subhead.