"It is offensive for sure because America should be his top priority, first of all, and it's just comparing apples to oranges. It’s offensive to [Ukraine] too, they are going through a lot over there," said Kelsey French.

French reacted to Biden on Saturday comparing Poland taking in more than 2 million Ukraine refugees to the migrant situation on U.S. southern border.

US President Joe Biden delivers a speech about the Russian war in Ukraine at the Royal Castle in Warsaw, Poland on March 26, 2022. (Brendan Smialowski / AFP) (Photo by BRENDAN SMIALOWSKI/AFP via Getty Images)

Biden made the comment after thanking Polish President Andrzej Duda for his country's response to the humanitarian crisis and pledging U.S. financial aid.

"We do acknowledge Poland has taken on a lot with all of the responsibility," Biden said.

"The fact that you have so many Ukrainians seeking refuge in this country of Poland. We understand that because we have, at our southern border, thousands of people per day literally, not figuratively, trying to get into the United States," he said.

After the Russia-Ukraine war surpasses over a month-long, Ukrainian refugees fled their home country as Russian forces advanced across their territory. The United Nations reported that more than 3.7 million refugees have fled Ukraine since Russia started invading Ukraine on February 22nd.

Illegal immigrants who arrived across the Rio Grande river from Mexico make their way along a track past a US border patrol agent on March 27, 2021 towards a makeshift processing checkpoint before being detained at a holding facility, in the border city of Roma. (Photo by Ed JONES / AFP) (Photo by ED JONES/AFP via Getty Images)

There were more than 178,840 migrant apprehensions at the southern border in December, marking the latest month significantly higher than the prior year and the latest sign that the migrant surge is unlikely to end anytime soon.

French told host Todd Piro that her husband and his colleagues have faced an overwhelming surge of migrants, with the area at "max capacity" and agents "at their breaking points."

"We have people wandering the streets with backpacks on, standing on the corner begging for food and money. … We're already stressed and our anxiety is at an all-time high. It's scary really," she added.

Furthermore, she accused Biden of creating the border crisis after ending the Trump-era Remain in Mexico policy, causing the border situation to "change overnight." 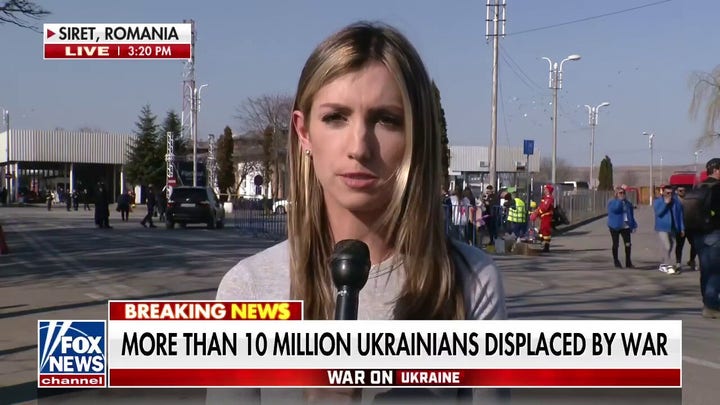 "They are doing mandated overtime again. And all of that is for processing, so our borders are left open. So that stresses him out. That is really disheartening for all of the agents to see they are paid to do a certain job and they are not able to do that," she said.