"This is the evidence. This email shows that we have not only the Justice Department involved in this diabolical plan but also the Education Department," Nomani told "Fox & Friends" host Brian Kilmeade Wednesday.

"It’s a real miscarriage of governance and we, the parents are not going to shut up. We are CEO’s, CFO’s, the janitor in our homes, we are everything," said Nomani, a Virginia resident who has been outspoken against teachers weaving critical race theory into their curriculum.

Miguel Cardona speaks after President-Elect Joe Biden announced him as his nominee for Education Secretary at the Queen theatre on December 23, 2020 in Wilmington, Delaware. Cardona, the Connecticut Education Commissioner, will face the urgent task of planning to reopen schools safely during the COVID-19 pandemic. (Photo by Joshua Roberts/Getty Images) ( (Photo by Joshua Roberts/Getty Images))

Education Secretary Miguel Cardona is facing calls to resign after it was revealed Tuesday that, according to a National School Boards Association official, he had solicited the controversial letter from the NSBA last year that compared protesting parents to domestic terrorists.

The NSBA's Oct. 22 letter, which it has since apologized for, called for federal action to address hostilities toward school boards as possible acts of "domestic terrorism" and suggested using the Patriot Act against parents.

President Biden's Department of Justice relied on the NSBA letter in creating its own Oct. 4 memo directing the FBI and U.S. attorney's offices to investigate "threats of violence" at school board meetings in order to combat what it called a "disturbing trend" of harassment of school officials. 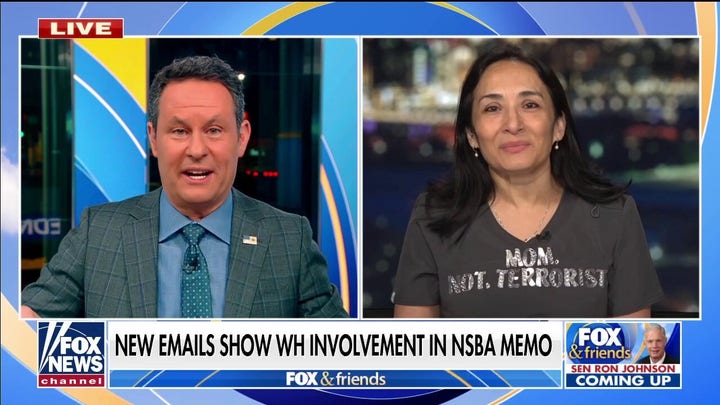 Previous emails had revealed that the NSBA was in contact with the White House and Justice Department in the weeks before it publicly sent its letter, but an email exchange obtained by the parents group Parents Defending Education through a Freedom of Information Act (FOIA) request and reviewed by Fox News Digital indicates the Education Department was more involved with the letter's creation than previously known.

In a Oct. 5 email, NSBA Secretary-Treasurer Kristi Swett recounted that NSBA interim CEO Chip Slaven "told the officers he was writing a letter to provide information to the White House, from a request by Secretary Cardona."

Nomani said that the Biden administration has not gotten the memo that "we are moms, not domestic terrorists."

"We will not shut up because these are our babies that we are protecting. And so the Biden administration is just waging a war with the wrong constituents here in America. We are moms, we are dads, and we are not going away."

Kilmeade called the latest developments "amazing" and a "duplicitous" move by the Biden administration.

"They accuse Republicans of fueling moms like you to go after school boards like in Virginia and that was 100 percent a lark," he said.