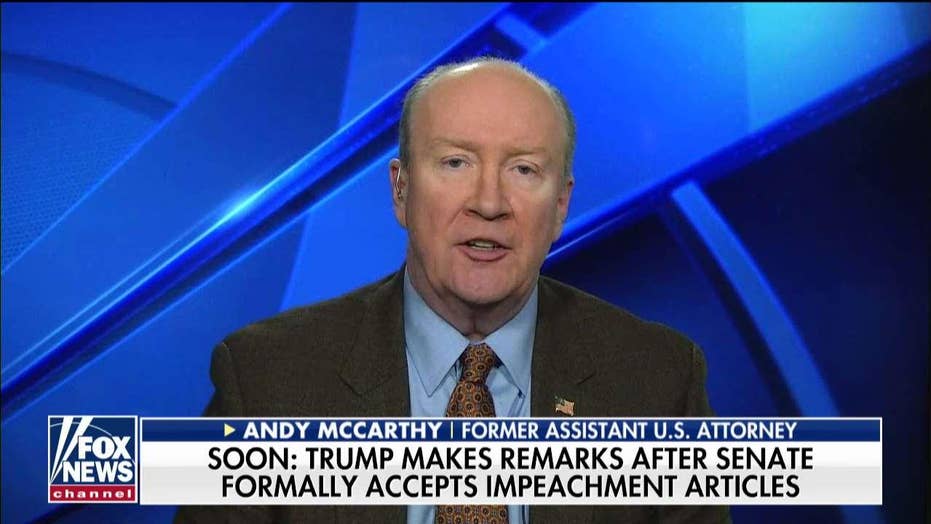 Former federal prosecutor Andy McCarthy laid out Thursday how President Trump's legal team should counter the case against him in the Senate impeachment trial and argued that “nothing consequential happened” as a result of the alleged offenses.

“The Ukrainians got their funding, [Ukrainian President Volodymyr] Zelensky got his visit with the president, there was no commitment that was required to do any investigation of the Bidens,” McCarthy told "Outnumbered Overtime," highlighting facts that could counter the Democrats' impeachment case.

The seven House members who will try to convince two-thirds of the Senate that Trump should be removed from office are Rep. Adam Schiff, D-Calif., Rep. Jerrold Nadler, D-N.Y., Rep. Hakeem Jeffries, D-N.Y., Rep. Zoe Lofgren, D-Calif., Rep. Jason Crow, D-Colo., Rep. Val Demings, D-Fla., and Rep. Sylvia Garcia, D-Texas. Schiff directed much of the impeachment inquiry out of the House Intelligence Committee he leads. Nadler is the chairman of the House Judiciary Committee, which drafted the articles of impeachment.

Unlike former President Bill Clinton's impeachment trial, in which the 13 managers were white men, Pelosi selected a diverse group of representatives with a range of experience.

"For all of the huffing and puffing that happened here, and the Democrats are going to put a lot of emphasis on what must have been going through the president’s mind and his intention to corrupt his office and all that stuff, where I think the president’s defense wants to be is, 'Bottom line here, nothing happened.'"

“Anything else that erupts in the trial, they’re kind of protected from it,” McCarthy added.