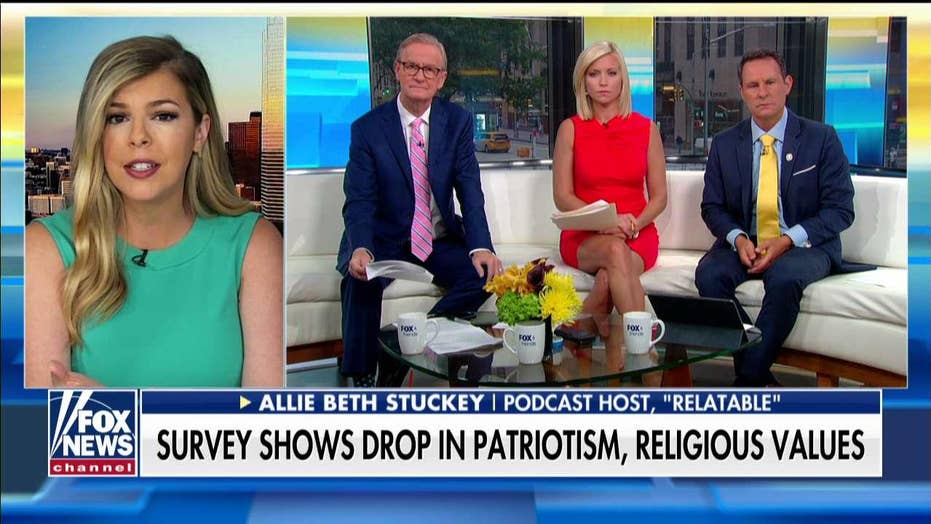 Allie Beth Stuckey on poll showing young Americans don't value patriotism, religion as much as in past

Podcast host Allie Beth Stuckey said on Tuesday that she was not surprised about a poll finding young Americans placing less value on religion, having children, and patriotism over the past two decades.

“We are a generation that is obsessed with self-love, with self-care, with self-fulfillment and sacrifice is seen as totally uncool and selfishness is seen as completely trendy,” Stuckey told “Fox & Friends.”

JONATHAN MORRIS: PATRIOTISM, RELIGION, HAVING KIDS NOT SO IMPORTANT TO YOUNG PEOPLE – WHAT'S GOING ON?

Stuckey, who said she is “disappointed” by the poll results, noted that the younger generation does not want anything to do with religion, family, and patriotism because it’s “bigger than us.”

“The reason why that makes me sad is because young people are missing out on some of the greatest sources of joy,” she said.

Stuckey also said that young people are hearing that “collectivism is not dangerous,” and that America is “not special” and “nothing to be proud of.” She added that, in general, young people are gaining a negative perception of America from the education system, social media, and political candidates.

“We heard even Democratic candidates compare climate change to World War II, which is absolutely crazy, but I think that speaks to the problem is that this is what young people are hearing,” she said.

Stuckey went on to say that people are “embracing God-lessness” and show no interest in having kids.

“The greatest responsibility they really want is having a dog,” Stuckey said.

“I’m a millennial as well and I just worry that some of these people think that they’re going to find lasting happiness, just in themselves, making themselves happy and it’s just not there.”

The survey began 21 years ago when Americans were asked which values were most important to them and the majority responded that “principles of hard work, patriotism, commitment to religion and the goal of having children” were critical.

“Today, hard work remains atop the list, but the shares of Americans listing the other three values have fallen substantially,” Wall Street Journal reporter Chad Day wrote about the results.