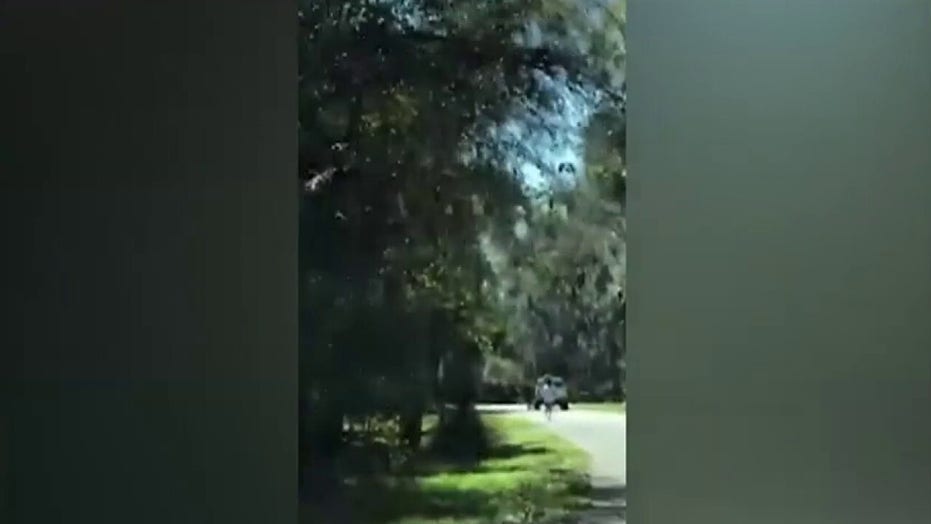 Newly released video of Ahmaud Arbery, who was shot and killed while jogging through a Georgia neighborhood last February, holds "no bearing whatsoever" in the legal defense of the father and son charged with his murder, a former U.S. attorney told Fox News on Sunday.

The Arbery family's lawyers said the video, apparently Glynn County home security footage, showed Arbery, 25, walking down the street on the afternoon he was killed. The man walked into the garage of a house under construction, then walked around the back of the house and left within a few minutes, most of the time out of view of the camera. He wasn’t seen taking anything.

After he entered the property, another man across the street could be seen watching the scene. The man said to be Arbery then came out of the front door of the house and ran down the street.

"It really has no impact at all on the ultimate outcome of the shooting," former U.S. Attorney for the Middle District of Georgia Michael J. Moore told "America's News HQ" anchor Arthel Neville.

"He's not reported to have been seen carrying a drill set, a toolbox, a nail gun, anything you might think of, not even seen breaking in the place. He's just seen running down the road," Moore explained.

Attorneys for Arbery's family said the video was recorded minutes before the killing near Brunswick, Ga., and proved Arbery wasn't involved in a crime.

"He tried to protect himself and ended up being the victim here in what can only be called a modern-day lynching, I think," Moore said. "It’s inexcusable, and this new video has no bearing whatsoever."

Investigators said Travis McMichael, 34, while with his father, Gregory, 64, both of whom are white, shot and killed Arbery, who is black, outside Brunswick on Feb. 23.

The older McMichael reportedly saw a man running in broad daylight through his neighborhood and called 911 to report “a black man running down the street” and said he suspected the man was involved in recent burglaries. He called his son, and the pair armed themselves -- then tracked Arbery down on the road, investigators said.

The younger McMichael, Travis, allegedly shot Arbery during the encounter, killing him.

"What I hope happens in the meantime is that there's a real review on what happened to delay the arrest," Moore said.

"I’m particularly concerned with officials who may have had knowledge about this tape and done nothing. These kinds of circumstances and what we see in that tape, when you see that, I would just say that inaction is never acceptable," he added. "I hope that not only are we talking about the McMichael case, but that we talk about other officials who may have been involved in either delaying or hiding evidence, willfully ignoring evidence that clearly shows that Mr. Arbery was unjustifiably gunned down in the street."

President Trump announced Friday that law enforcement and the "good governor" of Georgia will investigate the matter "strongly."