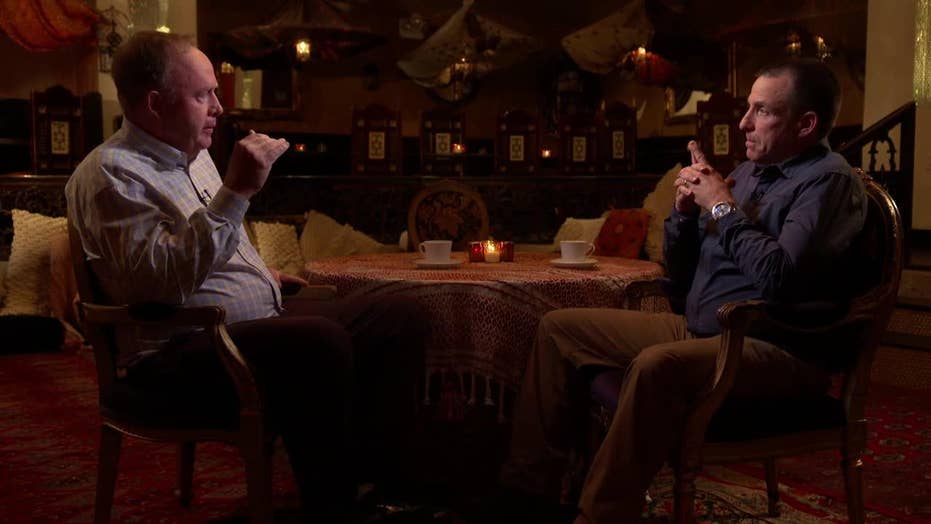 In a powerful new episode of Fox Nation's "Embedded in Harm's Way," Fox News war correspondent Steve Harrigan battled back emotions to thank-- for the first time-- the cameraman who saved his life in Afghanistan 19 years ago.

Harrigan was already in the country in 2001 before the U.S. invaded in October of that year -- driving the Taliban from power following the September 11th terror attacks. Joel Fagen, a retired U.S. Marine combat photographer, was dispatched by Fox News to go to the war zone and find the correspondent.

"I was at the Pentagon and I got called up to New York a week after 9/11," Fagen said to Harrigan in the Fox Nation special. "I had one mission, simple mission.  It wasn't easy, but it was simple.  I was tasked to go find you and keep you on-air -- that was it. That's as simple as it gets. Keep my gear operational. Keep me operational and keep you on the air on the battlefield."

The two men recalled covering the war with very little resources in the middle of an increasingly dangerous situation, though they never missed a scheduled on-air report.  At one point, Harrigan said that he truly feared for his life.

"I'm just now starting to tear up-- I'll tell you because I want to get it out," said Harrigan, as he began to describe a treacherous three-day car ride across Afghanistan with Fagen and their Afghan fixer, Saquib, in the early days of the war.

"At one point, I remember the car gave out -- the air was thin, it was on a mountain -- and Saquib couldn't go any further and push the car.  And Saquib just said, 'Leave me by the side of the road,'" Harrigan recounted in the Fox Nation piece, nearly overcome with emotion.

At that critical moment, Fagen was able to push the vehicle up over a rise in the road, saving all their lives.

"My thought process on that whole thing was if the Jeep goes -- if the Jeep doesn't make it -- I mean, we're screwed either way," Fagen said.

ROADSIDE BOMB KILLS 9 AFGHAN CHILDREN ON THEIR WALK TO SCHOOL

"I pride myself on my endurance, often doing things by myself and being able to take a punishment, but...." continued Harrigan after a long pause. "I think I realized at that moment you were stronger than I was and I was very grateful for that.

"I'm glad we didn't let Saquib die by the side of the road," he whispered, struggling to get the words out. "And I'm glad you were able to push the jeep over the hill."

Nearly two decades, later Fagen said that his partnership with Harrigan gave him the motivation to survive.

"I wouldn't have done it with anybody but you," he said.  "I would've have wanted to do it with anybody, but you honestly... You were geared for that assignment."

"I believe Joel saved our lives," Harrigan told Fox News.  "It is nice to get to thank him 19 years later... I guess I sound like a jerk, but you know how guys are.  I never actually said that."

The Fox Nation documentary also details, what Harrigan calls a "window," during the course of war reporting when journalists can live with the people of the country that they are reporting on.  But as Harrigan and Fagen observed, as the fighting in Afghanistan dragged on the situation changed dramatically.

"At the start of the war, we're knocking on people's doors, accepting their hospitality. By the end of the war, I was in like a million-dollar MRAP vehicle looking through slits, you know, where you could just barely see the people," remembered Harrigan. "Before journalists are being kidnapped and targeted and killed and everything, you're actually out with the people. But by the end, you really have no contact because it's just too dangerous. But I think that opportunity of living with people who are fighting a war, at least in Afghanistan, is gone."

To watch all of "Embedded in Harm's Way" go to Fox Nation and sign up today.