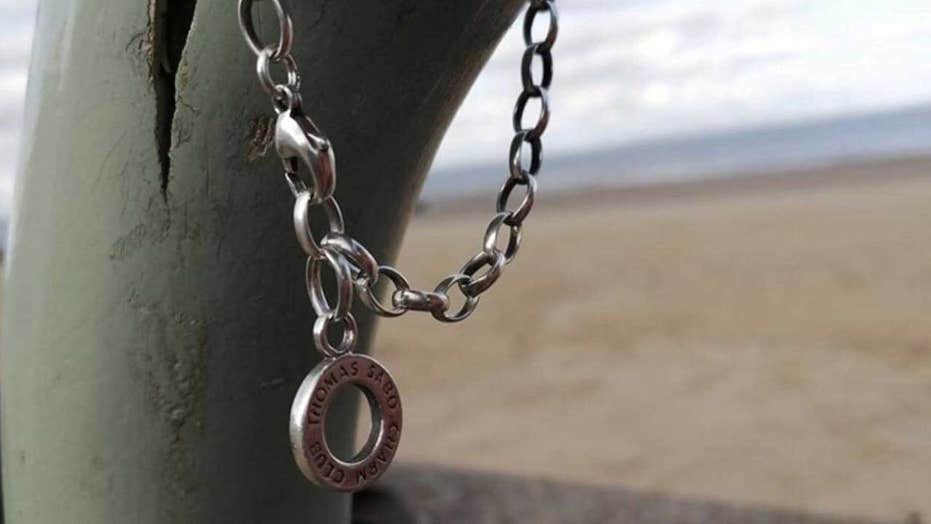 A woman in Scotland is thanking a local community for helping her find a long-lost bracelet she was gifted by her late cousin.

Lauren Blackie, from Edinburgh, had received the bracelet several years ago from a close cousin she grew up with, but who tragically committed suicide in 2016. Then, last year during a trip to the coastal town of Portobello with her young son, Blackie misplaced the bracelet and was completely heartbroken.

Lauren Blackie, of Edinburg, Scotland, was completely devastated by the loss of the bracelet, as it held sentimental meaning. (SWNS)

"I was so close to my cousin so it was just awful when I lost it,” the 29-year-old woman said of losing the gift her late cousin Brett had given her, according to SWNS. "He just meant the world to me; we were the same age and grew up together."

Blackie said she “searched and searched” — and had almost given up hope — before turning to Facebook, where she found a group filled with members of the Portobello community. As a last-ditch attempt, she asked for help.

“This [bracelet] is massively sentimental to me,” she wrote, explaining that she was gifted the jewelry on her 21st birthday by “a family member who is now gone.”

Lauren Blackie was gifted the bracelet by her close cousin Brett, who tragically committed suicide in 2016.  (SWNS)

“I’d even give a wee reward to have it back and to say thanks,” she wrote.

Blackie said the group was friendly and sympathetic, but her post didn’t generate any leads — until more than a year later, when she spotted a post from another mom who claimed her son found a very familiar-looking bracelet on the beach.

"As soon as I saw it, I knew it was mine because it was missing one of the links in the chain,” she said, per SWNS.

The other mom said she handed over the bracelet to a local coffee shop for safekeeping — and Blackie was soon reunited with it.

"It's a miracle that it's back with me after such a long time," Blackie said. (SWNS)

Blackie also explained that the bracelet was located during an especially meaningful time for her and Brett.

"It would have been his 29th birthday today,” she said. "It's a miracle that it's back with me after such a long time.”