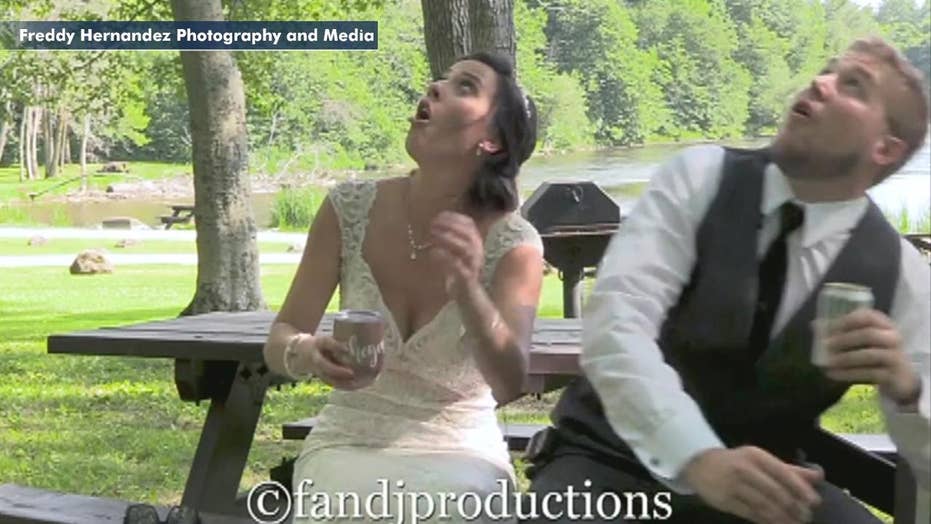 Look out below! Tree branch nearly falls on newlyweds

Two Wisconsin newlyweds are thanking their lucky stars after narrowly dodging a falling tree branch – and a potential tragedy – on their big day.

Cheyenne and Lucas Kopeschka said “I do” on June 30, in an outdoor ceremony in Fredonia, Fox 6 reports. Sitting side-by-side at a picnic table after the wedding, the pair were drinking beer and discussing their affection for each other on camera just moments before the scare.

The lovebirds were filming a segment for their wedding video on the big day when tragedy nearly struck. (Freddy Hernandez Photography & Media/Fox News Channel)

In the footage, shot by Freddy Hernandez Photography & Media, the bride had just finished recalling one of the first things she loved about her beau (his Nikes) when the groom began to speak, and branches began to loudly crackle overhead.

The startled pair is then seen running out of the frame as a massive, leafy branch falls where they were sitting.

"Oh s----" someone can be heard saying in the background. “Oh my god!” another adds.

“You always see stuff like this on YouTube videos but never in real life and when we saw it, we were all just shaken up,” Freddy Hernandez told CBS 58 of the moment, which has since been viewed over 17,000 times on Facebook.

He further divulged that right after the branch fell, Cheyenne mused, “Our love is forever going to be stronger than that tree.”

PHOTOGRAPHER TRACKS DOWN MYSTERY COUPLE AFTER CAPTURING THEIR PROPOSAL ON CAMERA

Incredibly, the new Mr. and Mrs. returned to the same picnic table to finish the video interview.

“We’ve never seen anything like this,” Hernandez said. “Just happy they walked out. We had an amazing rest of the day. They didn’t let this ruin their day.”

The couple isn't exactly hoping guests forget about the moment either, as they incorporated footage of the scene into their wedding video, along with more traditional moments like releasing a dove and celebrating their walk down the aisle.