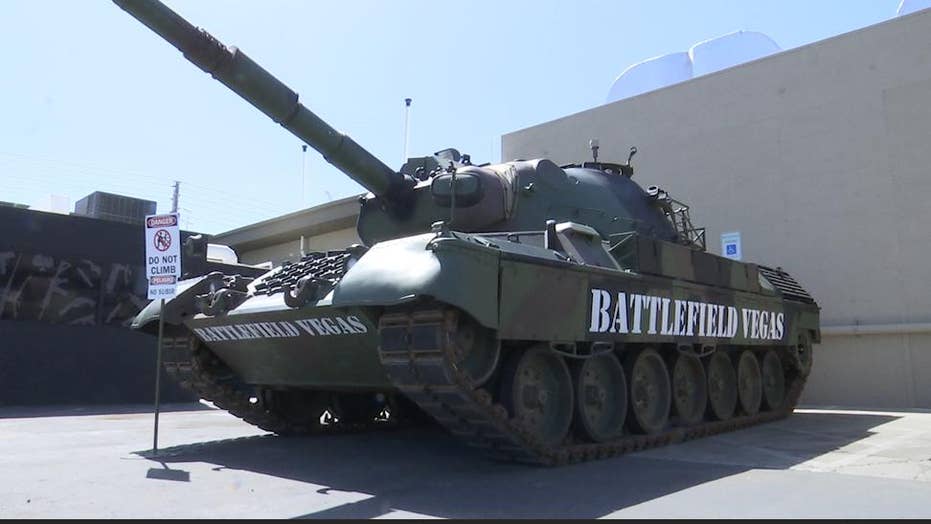 Feel like a soldier at Vegas war ‘theme park’

LAS VEGAS – Just off the Las Vegas Strip, a large tract of land resembles an army barracks replete with tanks, Humvees, and a parked helicopter. But this is no official military installation. Instead, the grounds are a sort of war theme park for civilians clamoring to experience a day in the life of a soldier.

Battlefield Vegas opened in 2012 and has amassed an arsenal of hundreds of weapons dating back to World War I for customers to choose from. The indoor gun range is the highlight of the shooting experience. Fox News was allowed to shoot a minigun. This multi-barrel machine gun can spray 200 rounds in 1.3 seconds.

Adorned with protective headset and safety glasses and steadied in a bracing stance, a shooter is helped by an attendant who gives the go ahead.

The firepower would have blown me against the wall, had the weapon not been mounted to the ground. After a loud flash of gunfire, mere seconds, it was over. The ear-splitting hail of bullets seemed over before it even began. The minigun is one of the most popular offerings at the range, according to Matthew Supnick, operations manager of Battlefield Vegas.

“We came in with the military theme, we’re about 90 percent staffed by veterans of either prior service or reserve, or National Guard. That’s gives us a really unique spin because most of our staff are highly trained on the weapons systems,” he said.

The cache of hardware is an offshoot of the private personal collection of the co-owner Ron Cheney.  Many of the guns were either built or refurbished. The armored vehicles in the collection’s caravan have come from all over the world. The experience not only lets customers have fun with all the “toys,” but there is a focus on military history as well since some are vintage pieces from the major conflicts of the 20th century.

A staffer positions and readies the minigun, a machine gun with a high rate of fire, for use at the target range (Fox News)

Battlefield Vegas, and other gun ranges near the Strip, have found themselves in a defensive posture recently, especially in the wake of the largest mass shooting in U.S. history a few miles away.

The company says it stays as far away from politics as it can. But as the national conversation on gun rights and gun control reaches a fever pitch after the Parkland school shooting in Florida in February, shooting ranges are trying to avoid an all-encompassing stigma.

At Battlefield Vegas, participants have to sign a waiver and get a preliminary briefing on the rules of the range before a weapon even touches their hands. Battlefield Vegas offers customers the option to get picked up from their hotel on the Strip in a military Humvee and guests get to take home their targets as a souvenir.

For thrill seekers, the most outlandish and highly sought after experience is the expensive “Crush a car with a tank” option. This $2,500 ride lets visitors get behind the wheel of a replica M1A1 Abrams tank and drive over the shell of a junkyard car.

A tank drives in the lot of Battlefield Vegas (BattlefieldVegas)

Other packages are named after famous battles and special operations allowing customers to use the weapons that were fired in Stalingrad, Iwo Jima, D-Day and by SEAL Team 6.

Battlefield Vegas is planning to expand this summer, according to Supnick. An outdoor range is in the works where the battlefield experience will become even more realistic. Flamethrowers and firing ammunition from tanks are all in the works.