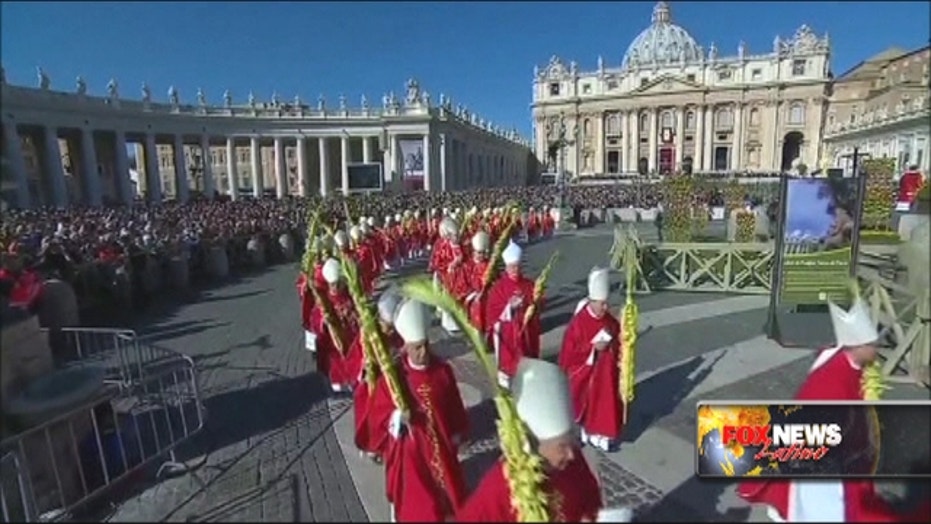 Pope Francis led a Mass at the Vatican to celebrate Palm Sunday, marking the beginning of Holy Week which culminates on Easter Sunday.

At the end of Mass outside St. Peter's Basilica for some 70,000 faithful, Francis prayed for those who died in Tuesday's crash in the French Alps, noting there was a group of German schoolchildren aboard the aircraft. The disaster killed 150 people, including the co-pilot who investigators say deliberately slammed the plane into the mountain.

Francis clutched a palm frond during the traditional procession at the service's start. In keeping with the simple tone of his two-year-old papacy, Francis leaned on a plain wooden pastoral staff instead of a traditionally more ornate one as he stood under a red canopy on the basilica steps.

He wore bright red vestments to recall Jesus' death by crucifixion. In his homily, Francis stressed humility, another quality that has marked his papal style.

He hailed those who quietly ignore their own needs to serve others, and paid tribute to Christians who endure with dignity humiliation, discrimination and even persecution for their faith.

Many of the faithful, holding olive branches as symbols of peace, are among pilgrims who have poured into Rome for Holy Week appearances by Francis.

On Friday evening, the pope will preside over a Way of the Cross service at the Colosseum. On Easter Sunday he will celebrate mid-morning Mass in St. Peter's Square, and then give a blessing from the basilica's central balcony.