The ring was returned to the woman on Friday night. (NYPD Midtown North)

The New York City Police Department has come to the rescue of yet another butterfingered couple.

On Saturday, the NYPD announced that they had recovered a lost engagement ring from a sewer grate near Times Square after it managed to fall off a woman’s finger on Friday, the New York Post reported.

WATCH: HUSBAND SURPRISES WIFE OF 67 YEARS WITH NEW RING AFTER SHE LOSES HERS

The ring was returned to the woman late on Friday night after NYPD officers arrived on the scene and worked alongside emergency and fire department workers to fish it out.

“Ring in the new year & you won’t believe it — it fell down a sewer grate,” read a tweet from the official Twitter account of Manhattan’s Midtown North Precinct.

“It’s the first engagement ring we recovered in 2019,” the precinct added, making reference to yet another engagement ring the NYPD recovered on Halloween Day after a couple of English tourists managed to lose it down a utility grate in Times Square. 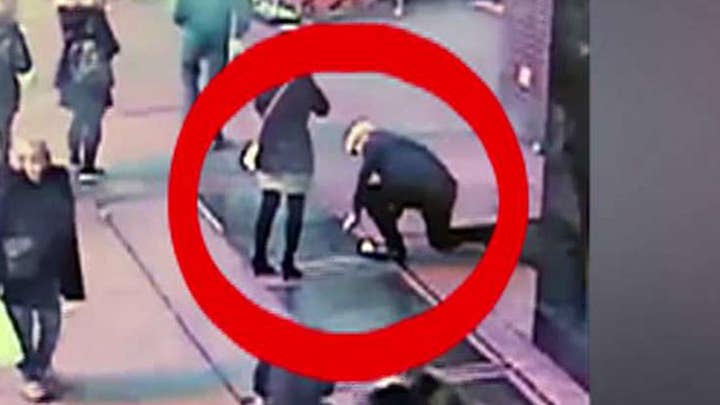 Daniella Anthony and John Drennan had gotten engaged on Nov. 30, and recruited two nearby police officers to help after Anthony’s engagement ring bounced into the grate that evening. The couple ended up returning to the U.K. without the ring, but they later learned the officers returned to the scene the following day and successfully retrieved it.

The officers ultimately reunited the couple with their ring on an episode of “The Ellen DeGeneres Show.”

The Midtown North Precinct, however, joked on Twitter that no such “Ellen” moment had been planned when returning this latest engagement ring to its owner.