A TSA officer is being hailed a hero after she saved a baby from choking.

Cecilia Morales jumped into action this week when she heard frantic cries from a family at Newark Liberty International Airport in New Jersey. A mother had been calling out for assistance because her 2-month-old son had stopped breathing when she picked him up from his car seat carrier.

According to a press release issued by the Transportation Security Administration, the mother tried to get her traveling party to help, but their efforts were unsuccessful.

New Jersey-based TSA Officer Cecilia Morales jumped into action this week when she heard frantic cries from a family at Newark Liberty International Airport, where she saved a 2-month-old boy from choking. (Transportation Security Administration)

Morales stepped up and tried to relay instructions on how to perform the Heimlich maneuver on an infant – a skill she learned from the 10 years of experience she had as a trained emergency medical technician.

"But [the mother] was so nervous and I knew if I didn’t get over there, it wasn’t going to be a good outcome," Morales told the TSA.

In security camera footage shared with Fox News Digital, Morales can be seen jumping over the conveyor belt rollers at her assigned security checkpoint. She grabs the baby from the mother and places him face down on her arm and begins to pat his back – all while keeping his airways open. 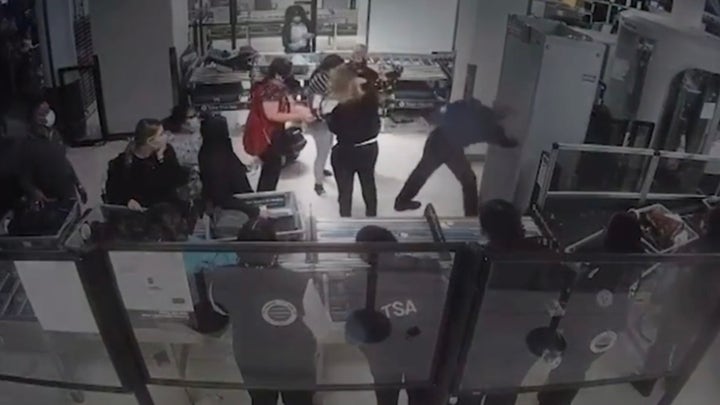 The TSA reports that Morales carried out this process two times before the baby responded.

Morales carried the baby through the walk-through metal detector and waited with the mother until a pediatric EMT arrived on the scene. The baby was provided oxygen and is "doing well now," according to the TSA.

Regarding the security camera footage, Morales reviewed it later on and told the TSA, "It was the first time I’ve ever seen myself in action, saving a life. It was mind-blowing to watch. I felt that my training and experience just took over."

Morales joined Newark Liberty International Airport’s TSA team in October. Before joining the TSA, Morales worked as an EMT in Northern New Jersey for a decade.

Officer Cecilia Morales worked as an EMT for 10 years before she joined the TSA. She put her life-saving skills to use when she performed the Heimlich maneuver on a choking baby during busy holiday air traffic. (Transportation Security Administration)

As an EMT, she has had to perform the Heimlich maneuver on children and adults, but she told the TSA that this was her first time performing the life-saving maneuver on a baby.

"Two months on the job and she’s literally a life-saver," said Thomas Carter, the TSA’s federal security director for New Jersey. "Officer Morales’s quick reaction and actions helped ensure that this family will have a happy holiday season. Her actions were inspiring."

While most parents do their best to make sure their babies are kept away from small objects that are choking hazards, infants under the age of 1 can experience mild choking from excess mucus, spit up or vomit, according to Healthline.

Parents can learn how to perform the infant Heimlich maneuver or CPR from their local hospital, Red Cross or National CPR Foundation. Instructional videos are available online to help parents familiarize themselves with these life-saving techniques, but in-person courses with certified trainers could be beneficial.

"If Officer Morales did not utilize her critical thinking, knowledge and quick response, perhaps we could have had a terrible outcome," said TSA Manager Ayrana Frazier, in a statement. "In the moment Officer Morales was selfless, and her priority was to save a life. We are proud to call her one of our own."