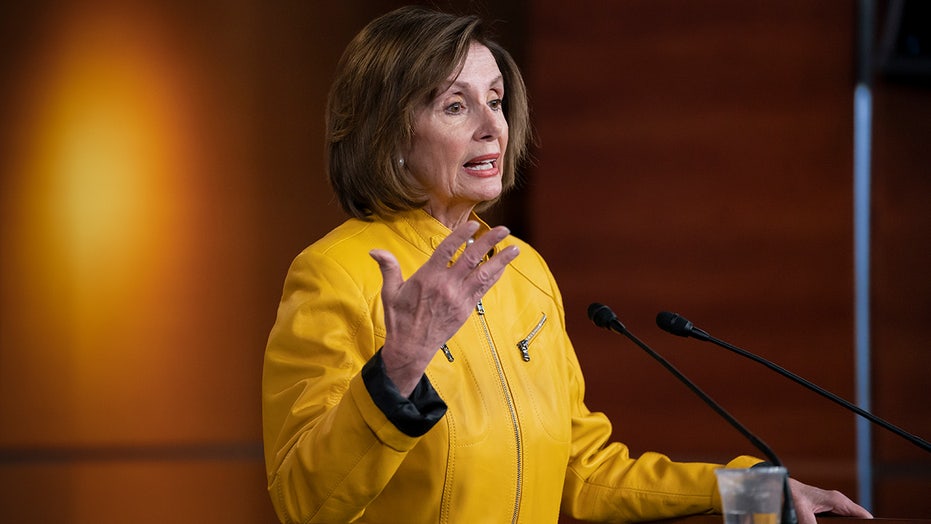 House Speaker Nancy Pelosi, D-Calif., made her thoughts clear during a Thursday press briefing, calling out Republicans for refusing to hold President Trump accountable for his latest statements, while rooting on the Golden State Warriors before the NBA Finals game later that evening, in a yellow motorcycle jacket.

Style critics have since concurred that the zipper-fixed look was “edgy” for the politician, while playfully comparing the jacket to fashion moments made famous by Elvis, Michael Jackson, “Buffy the Vampire Slayer” and Uma Thurman in “Kill Bill.”

“See my yellow jacket? Golden State Warriors,” Pelosi told reporters at the event of her mustard-colored coat. She completed the look with royal blue slacks and pumps, fully complimenting the Warriors’ team colors.

Speaker of the House Nancy Pelosi, D-Calif., reflects on President Donald Trump's statement that he would accept assistance from a foreign power, saying it's so against any sense of decency. (AP Photo/J. Scott Applewhite)

WHY IS MEGHAN MARKLE WEARING AN 'ETERNITY RING'?

Speaker of the House Nancy Pelosi, D-Calif., reflects on bills that have passed the House but die in the Senate because Senate Majority Leader Mitch McConnell, R-Ky., does not bring them up for a vote, during a news conference on Capitol Hill. (AP Photo/J. Scott Applewhite)

The designer of the eye-catching jacket remains unclear at this time.

Watchful social media commenters, meanwhile, had a whole lot to say about the fashion statement.

“I’m appalled by the yellow leather jacket. Elvis wouldn’t even wear that,” one Twitter user said.

“Michael Jackson called and wants his yellow jacket back,” another joked.

“Loving the yellow Kill Bill motorcycle jacket,” another chimed in.

Fans gushed over the design, declaring they want to “channel” her energy through the bold look, while other Twittizens speculated if the moment had a deeper sartorial meaning.

“What message is Speaker Pelosi sending with the golden yellow leather jacket she is wearing? Only commenting [because] it is edgy compared to her usual style. Anyone else notice?” one offered.

Critics, however, argued that the occasion wasn’t appropriate for the style statement.

“You thought it was appropriate to step to the microphone today when America is outraged and talk about your yellow Golden State Warriors jacket,” one skeptic said.

“Cute yellow jacket - now do your job, Nancy,” another echoed.

Notably, this is the second time in recent months that Pelosi’s outwear has made fashion headlines.

After frenzied speculation, the coat was identified by The New York Times as a MaxMara design released a few years ago.(AP)

In December, the 79-year-old’s “blood-red” red Max Mara coat flew off store shelves following an explosive, televised meeting, during which she and Sen. Chuck Schumer clashed with the president on security at the U.S.-Mexico border.