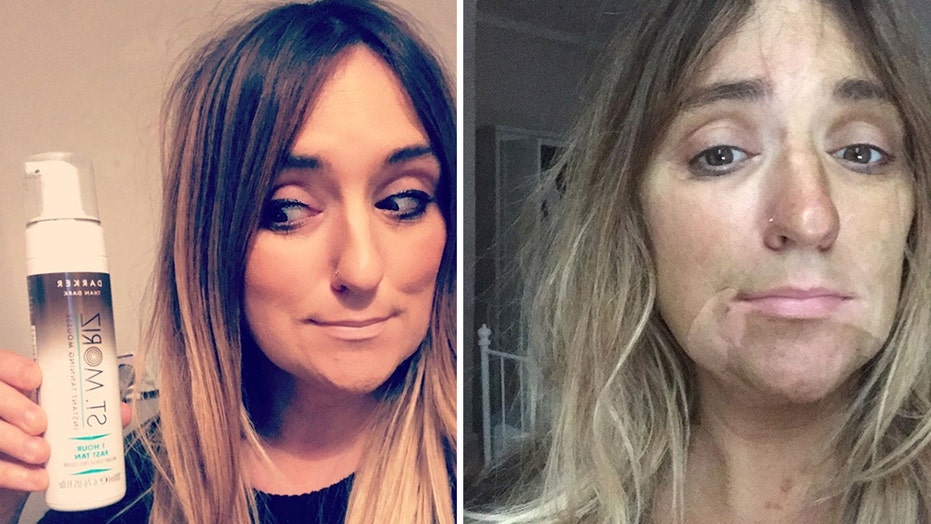 Don’t tan and drool is a lesson this single mom learned the hard way.

Musician Louise Harper of Kings Landing, Hertfordshire, reportedly applied self-tanner to her face and body the night before a gig.

However, instead of a beachy glow, the singer woke up with what her 13-year-old son described as looking like she had fangs, Metro reported.

The 40-year-old tried to scrub the odd stain, which was caused by her nighttime drooling, off in the shower with a loofah for nearly a half-an-hour, but it didn’t work.

Though Harper said the tan began to fade after she had scrubbed it for a while, it was still prominent enough that she had to make a run to a nearby store and buy foundation to cover-up the patchy pattern. (Kennedy News)

“My heart dropped when I looked in the mirror and I felt a bit sick,” she told Metro. “It’s not like I could hide at home away from everyone for a couple of days – I’m a singer and a musician I had to go and do my gig.”

“The tan itself was really good everywhere else in the end but these two white dribble patches were so prominent – it was horrendous,” she continued to the publication.

Though Harper said the tan began to fade after she had scrubbed it for a while, it was still prominent enough that she had to make a run to a nearby store and buy foundation to cover-up the patchy pattern.

“A friend recommended a foundation so I went into town with a scarf wrapped around my face to hide it,” she told Metro.

Though it worked to hide the white spots, she said she had to continue to apply it throughout her performance that night because of the hot stage lights.

Fortunately, the tan has since faded enough for the mom to go out in public without the “patchiness.”

A man shared a photo of a hilarious self-tan fail, saying, ‘turns out you can’t spoon your Mrs after she’s fakes tanned.’

She’s not the first one to experience a self-tan fail. Last month a man shared his hilarious mess-up that happened after he fell asleep cuddling his girlfriend, who had just gotten a fake tan.

“Woke up thinking I had a big bruise on my leg,” Phillips wrote on Twitter, along with a photo of his thigh with a big streak of brown that matched perfectly with a white spot on his partner’s bronzed calf.

Alexandra Deabler is a Lifestyle writer and editor for Fox News.
FEATURED STORY