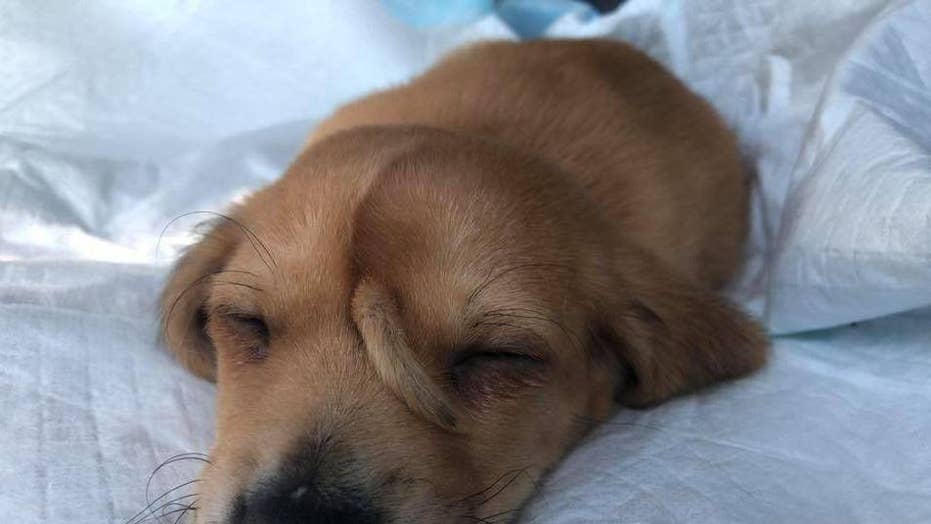 Animal rescue team finds puppy with tail on his forehead

Mac’s Mission specializes in animals with unique features. The rescue team recently found a pup with an injured paw and an oddly placed tail. It was between the dog's eyes.

Despite hundreds of adoption offers, Narwhal the “unicorn” puppy will remain with the founder of the animal rescue group that saved him in November, officials said.

Last month, officials with Mac's Mission, a special-needs dog rescue, discovered the beagle-mix puppy with a second tail-like growth between his eyes, wandering the chilly streets of Jackson, Mo. The nonprofit took him in and named the pup “Narwhal the Little Magical Furry Unicorn,” after the whale with a unicorn-like tusk. Soon after, his photo went viral on social media and drew international attention.

Though Mac’s Mission has since received over 300 adoption offers for the precious pup, organization founder Rochelle Steffen recently reversed her initial decision to find a new home for the dog. Citing his best interests and wellbeing, Steffen will house Narwhal and potentially train him as a therapy dog in the future, the Associated Press reports.

“I had no intention initially of keeping him. I didn’t want a puppy,” she told The Southeast Missourian in a Dec. 3 interview.

As time passed, Mac’s Mission struggled to sift through the bounty of adoption applications, while Steffen worried about the “stupid, ugly comments about this sweet little puppy” from online trolls. With Narwhal’s overnight fame came overwhelming attention and even, reportedly, frightening death threats.

People began showing up at the Jackson rescue to see Narwhal, Steffen said, prompting security measures and meetings “by appointment only.” Now, the internet-famous pup is watched at all times by Steffen and trusted volunteers.

Though people have made “giant” offers to buy the special dog, but Steffen is certain that “he’s not for sale.” (Tyler Graef/The Southeast Missourian via AP, File)

Though people have made “giant” offers to buy the special dog, Steffen is certain that “he’s not for sale.”

“If somebody is going to make money off of him, I would love to see it go toward the rescue, and save thousands more dogs,” she commented.

Instead, Narwhal will remain at Mac’s Mission for the foreseeable future – a decision which Steffen said has thrilled the group's staffers.

Moving forward, Narwhal will serve as a “spokesdog” for the nonprofit’s “Different Is Awesome” campaign. Eventually, the group hopes to train him as a therapy dog. (Mac's Mission)

“It’s not just a decision from me. The whole rescue cannot fathom him leaving,” she said.

“We all fell in love with him,” she added, saying that the prized pooch is “absolutely, exactly what we needed.”

Moving forward, Narwhal will serve as a “spokesdog” for the nonprofit’s “Different Is Awesome” campaign. Eventually, the group hopes to train him as a therapy dog.

For the time being, Steffen is focusing on getting Narwhal vaccinated and socialized as he adjusts to his fur-ever home.