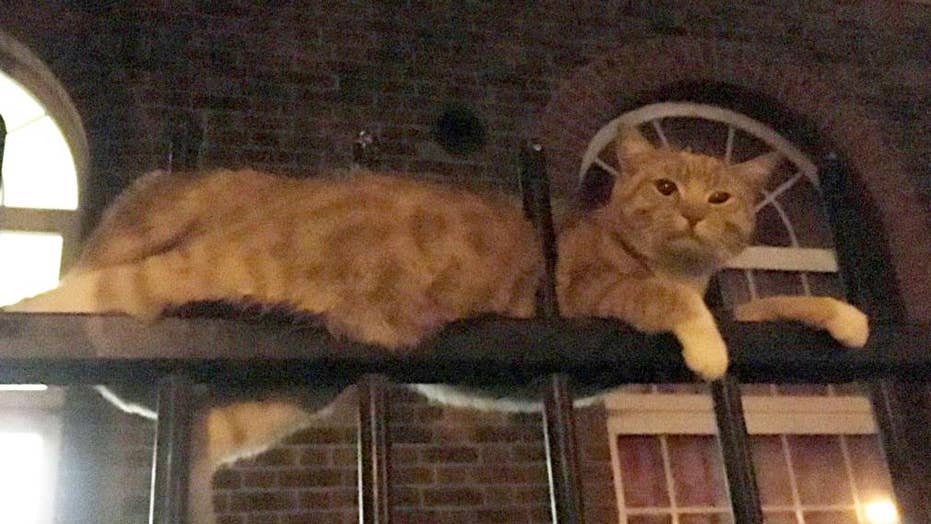 Warning - This video contains graphic images. A happy ending for Skittles, the cat who was impaled on two fence posts in London. He has returned home to his owner.

A lucky feline, dubbed the “miracle cat,” who survived being impaled on two metal fence posts in London got a happy ending after being returned home to his owner.

Skittles was discovered early in the morning March 9 stuck on the eight-foot railings in a suburban part of the city. Officials had to use car-crash machinery to remove the ginger cat and he later underwent three emergency operations.

BRITISH GRANDMOTHER BECOMES FIRST TO VISIT ALL 7 CONTINENTS BY MOTORBIKE

While performing the surgeries, the vet discovered that the fence posts had “narrowly missed” the cat’s vital organs. One pole pierced his back leg and a second one hit his abdomen.

The cat’s owner, 27-year-old Shanakei Forde, said 4-year-old Skittles had gone missing Friday, but since he’s an outdoor cat she wasn’t too worried. By Sunday, she grew concerned and was making lost posters to hang when her neighbor told her about a cat that had been found.

"He heard about it at a residents meeting and told me the good news that he'd been found, but that he'd been injured” she told SWNS. “When I saw the pictures I couldn't believe my eyes, I didn't believe that was him — it was so shocking.”

She said Skittles, a tough but loving cat, is “a bit shaken up” and happy to be home with her two kids, who consider him their “best friend.”

Royal Society for the Prevention of Cruelty to Animals investigators are still unsure how Skittles ended up on the fence. They believe he could’ve either fallen from a nearby building or been intentionally put on the fence posts by the Croydon Cat Killer. Either way, he’s lucky to be alive.

Forde is currently trying to raise money to cover Skittle’s vet bills, which cost more than $4,000.