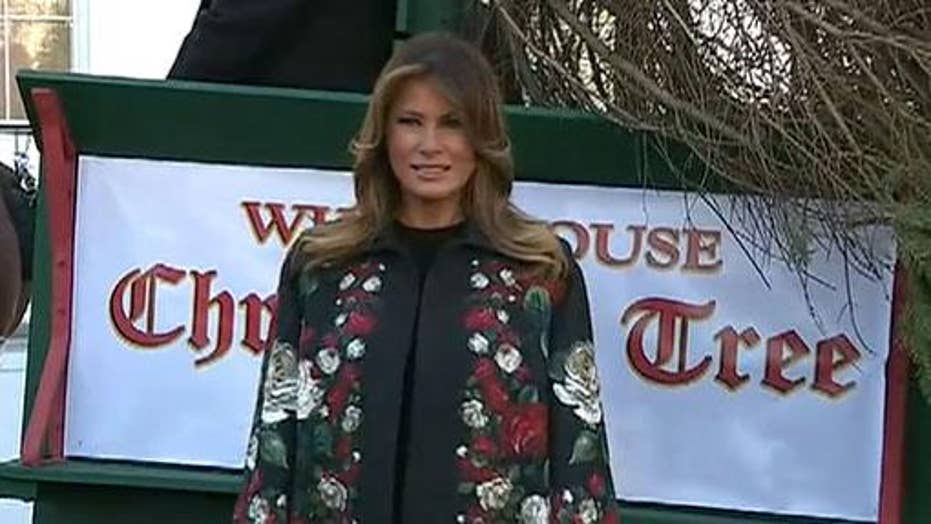 Melania Trump accepted the delivery of the White House Christmas tree. While it’s not quite as big as the Rockefeller Plaza tree, it’s still a very impressive evergreen.

Being the White House Christmas tree, this wasn’t just a regular old delivery. The tree was delivered by horse and buggy while the U.S. Marine Band played “O Christmas Tree,” AP News reports. The buggy was drawn by two horses named Cash and Ben.

The 18-and-a-half foot tall Douglas fir will be the centerpiece of the White House Blue Room. A chandelier will have to be removed from the room to accommodate the massive decoration.

The first lady, escorted by military aides, welcomed the horse and buggy at the White House’s entrance. She briefly inspected the tree before stopping to pose with the farmer that donated it.

Larry Snyder, owner of Mahantongo Valley Farms in Pitman, Pa., presented the centerpiece after winning an annual contest held by the National Christmas Tree Association. The contest has been held since 1966.

After accepting the tree, the first lady wished everyone a Merry Christmas before heading back inside.

Meanwhile, the White House hasn’t forgotten about Thanksgiving. On Thursday, the President will carry out the tradition of pardoning a turkey. Today, the White House tweeted out a poll asking followers to vote on which of two turkeys should be pardoned.

This year, the two birds up for pardon are named Bread and Butter.