Meghan Markle and Prince Harry have tied the knot at last, and all eyes have been on the royal bride since she stepped out at St. George’s Chapel.

Donning a fitted, long-sleeved gown with bateau neckline and chapel-length train by Clare Waight Keller for Givenchy, the new Duchess of Sussex looked radiant in natural makeup and classic jewelry.

Although some speculated that Markle would follow Kate Middleton’s lead and do her own makeup for the May 19 celebrations, Kensington Palace confirmed that the actress’ longtime friend, makeup artist Daniel Martin, got her glowing for the big day, in a press release obtained by Fox News. Her hair was styled Serge Normant.

With dewy skin, smoky eyes, a sheer pink lip and natural nails, it came as no surprise to style insiders that the 36-year-old opted for a natural look, as she was reportedly adamant about her freckles shining through on her wedding day.

Likewise, the bride is being praised for making her wedding headpiece truly unique as well.

“The Queen Mary Diamond Bandeau tiara originally had a sapphire at the center, but Meghan opted to go without the sapphire. She made it her own, but there was a historical note as well,” Esther Lee, senior news editor of The Knot, told Fox News.

Lee further declared the royal bride’s overall look as a  “very reflective and well thought out,” as Markle knows her now-iconic look will be “cemented in history and remembered, generation after generation.” 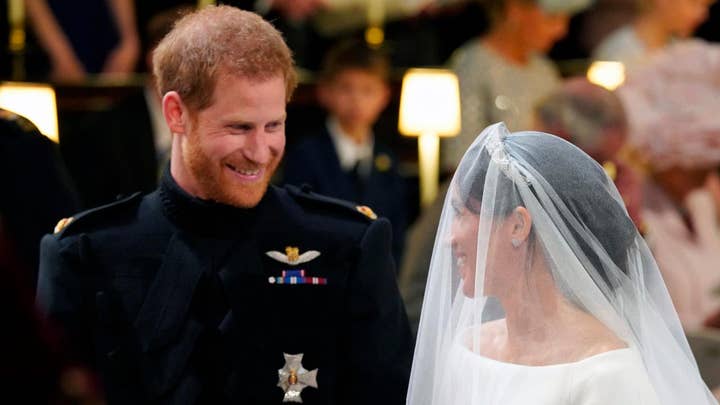 “The fact that she put so much thought and effort on the look itself really shows what a thoughtful and gracious person she is, knowing what effect [her bridal look] will have across the world” Lee said, praising the “simple attainability” of the new Duchess’ style and beauty aesthetic.

Prince Harry, too, broke tradition, as he kept his signature beard for the big day and has opted to wear a wedding ring

“While his brother and many other male royals chose not to wear a ring, Harry is wearing a platinum ring with a textured, sophisticated finish,” Josh Marion, vice president of fine jeweler Ritani, told Fox News. “The fact that he chose to wear a wedding band is very modern, which goes against tradition within the royal family. His band is also platinum and not Welsh gold, which runs contrary to royal tradition as well.”

“By both having bands they are honoring the tradition of marriage, however, the fact that he is wearing his and that it is not the same color as hers, is very modern,” Marion added.

Moving forward, the Duke and Duchess of Sussex's wedding day is simply start of their new chapter together as thoroughly modern monarchs.

“This wedding, like all weddings, will be a moment of fun and joy that will reflect the characters of the bride and groom,” said Jason Knauf, Prince Harry's personal communications secretary, Vogue reports.