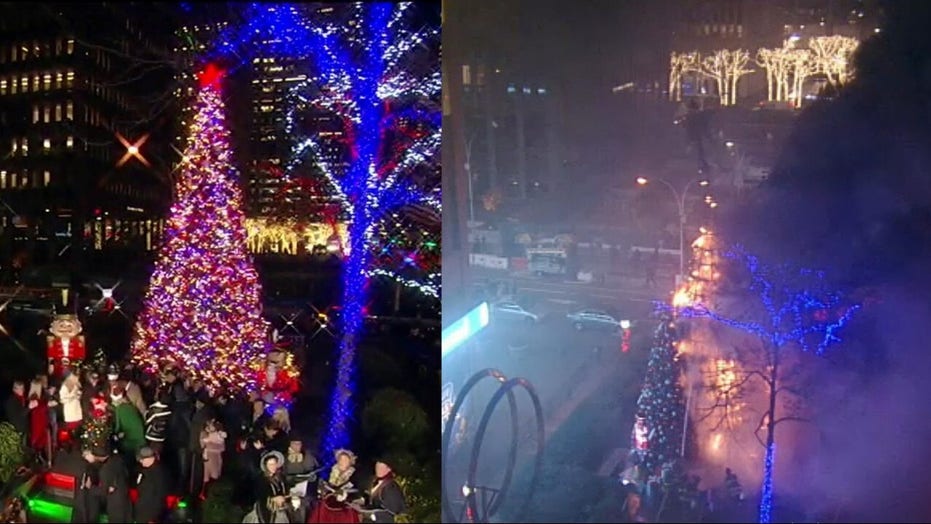 "My mom was very much a Christmas traditionalist and very community spirited," says Fox News Channel's Jesse Watters about his growing-up experiences and fun family times during the Christmas season.

He shares these and more in the new book, "All American Christmas" by Rachel Campos-Duffy and Sean Duffy.

"You put those two things together," says Watters about his mom's penchant for tradition and community — "and I have memories of us going door-to-door in our neighborhood in Philadelphia to sing Christmas carols."

When people opened their doors, he continues, "We'd burst into song."

A young Jesse Watters (right) is shown with his sister, Aliza, opening gifts at Christmas. As a child, he remembers going door-to-door to sing Christmas carols for neighbors and friends.  (Jesse Watters)

And then: "I don't think I knew this at the time, but I believe that some of the enthusiasm and energy was fielded by liquids that came from hidden flasks."

The "battle-hardened War on Christmas veteran" and beloved Fox News personality details this and more Christmas spirit in his contribution to "All American Christmas."

And as always, readers and viewers know exactly where he stands!

Here's an excerpt from an engaging essay that appears in the book.

Read Jesse Watters' take on the ‘War on Christmas’

Jesse Watters in All American Christmas: It's important to remember that what we celebrate in December is Christmas, and we should be wishing one another "Merry Christmas" and not "Happy Holidays."

Early in my career, I often went out to report from the front lines on the War on Christmas

"I was defending a holiday and the traditions that the vast majority of us celebrate and hold dear."

I remember some of the ridiculous attempts various groups made to deemphasize Christmas — not being able to call a Christmas tree a Christmas tree and substituting the word "holiday" in front of "tree," banning candy canes, not putting lights up in a town square due to concerns about global warming.

I tried to get to the bottom of all those stories, and I wasn't caroling, but I did knock on a lot of doors.

I wasn't fueled by anything in a flask; I was out there defending a holiday and the traditions that the vast majority of us celebrate and hold dear.

As a child, Jesse Watters desperately wanted a Michael Jackson jacket — which his colleague Dana Perino from "The Five" finally tracked down for him during a "Secret Santa" gift exchange. Watters shares his views on the War on Christmas and more in "All American Christmas." (Courtesy FOX News)

Those memories tie us to the past — to our families, to our friends, to our neighbors, and to those whose gifts were eventually repackaged and presented to children who understood and appreciated the gift of the season.

I guess we all just want to be startin' somethin' come the end of the year.

I prefer that thing be what we know and love as Christmas.

Excerpted from All American Christmas by Rachel Campos Duffy and Sean Duffy. To purchase a copy, click here.