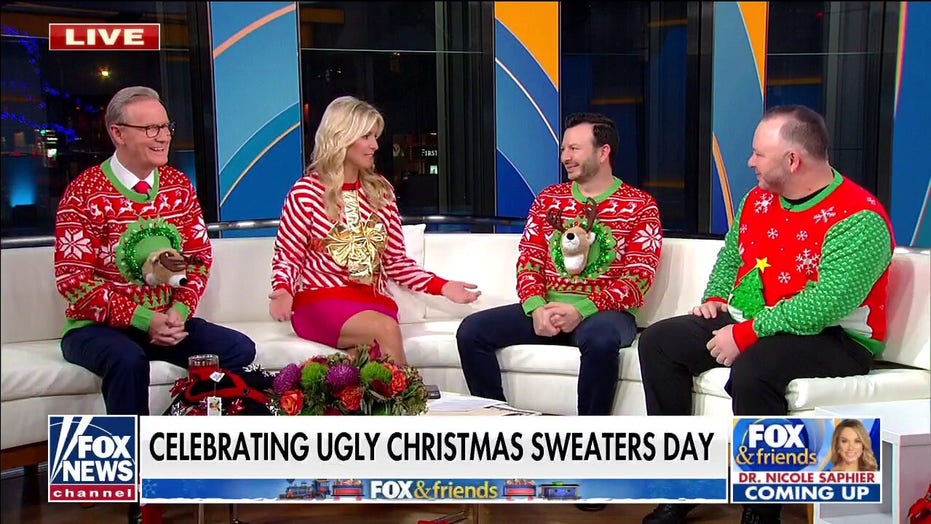 Founders of UglyChristmasSweater.com Mark and Fred Hajjar show off some of their favorite holiday sweaters.

December and candy canes just go together, and it looks like it’s been this way for hundreds of years.

According to the National Confectioners Association, the minty confection is believed to have been introduced in 1670 by a German choirmaster. The mysterious choirmaster reportedly worked at the Cologne Cathedral in what is now considered Köln, Germany, where he served shepherd crook candies to the young singers occupied during long Living Creche ceremonies.

The NCA reports that the early candy cane tradition spread throughout the rest of Germany and eventually made its way to the U.S. with help from August Imgard – a German-Swedish immigrant. In 18,47, Imgard reportedly celebrated Christmas by decorating blue spruce with candy canes and ornaments and his neighbors in Wooster, Ohio, took notice.

December and candy canes just go together, and it looks like it’s been this way for hundreds of years. (iStock)

"The tradition began to spread, and around the turn of the century, red and white stripes and peppermint flavors became the norm," the NCA wrote, in a history post about candy canes.

Candy canes began to be commercially manufactured in the 1920s by Bobs Candies, a sweets company based in Albany, Georgia. The factory’s owner, Bob McCormack, made "candy canes as special Christmas treats for his children, friends and local shopkeepers," according to the NCA.

Production of the candy canes went into overdrive in the 1950s after Bobs Candies introduced automation to its factory, which allowed machines to pull, twist, cut and bend candy canes with little human interaction.

Candy canes are believed to be a German invention from the 1670s. (iStock)

Bobs’ candy canes are still sold in the U.S. under the Ferrara Candy Co. Other candy manufacturers cook up candy canes throughout the year, with special attention from late November to December, including the Spangler Candy Co. and Doscher’s Candy Co.

WHAT'S THE STORY WITH EGGNOG? WHERE IT CAME FROM, HOW IT'S SERVED

National Candy Cane Day is celebrated in the U.S. on Dec. 26 each year. (iStock)