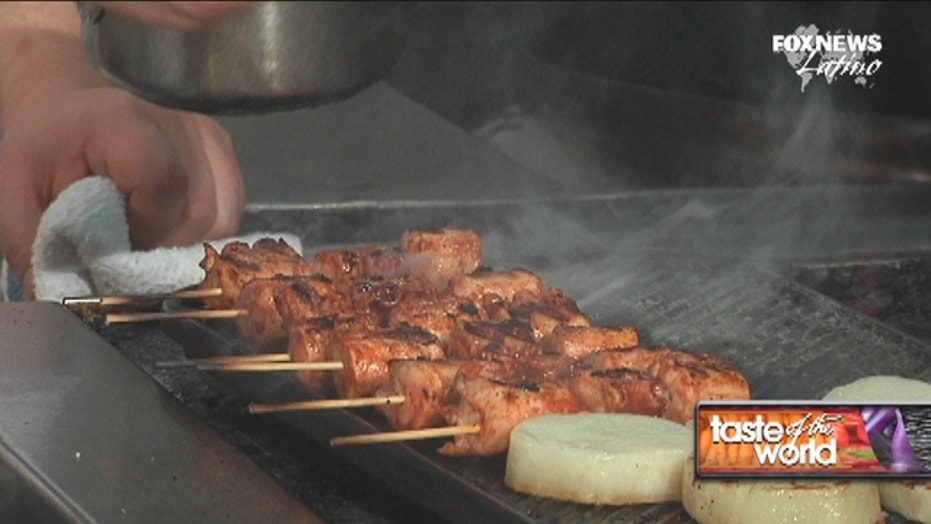 Taste of the World: Steak and octopus anticuchos

This is a popular and inexpensive dish that originated in the 16th century is still very popular. They can be found on street carts and street food stalls all throughout Peru and Latin America.

Anticuchos are a popular and inexpensive dish that originated in the 16th century and are still very popular. They can be found on street carts and food stalls in Peru and throughout Latin America.

They can be found on street carts and street food stalls all throughout Peru and Latin America. The meat used may vary but the most typical one are the veal heart anticuchos, marinated in ají panca, vinager and other spices.

Method
- Anticucho marinade: Blend all that ingredients and puree just enough to leave a little bit of texture to the marinade.

- Hanger anticuchos: Add just enough marinade to coat the meat. Cover and leave for at least 1 hour before cooking.

- Octopus: For a 4- to 6-pound octopus, bring enough water to a boil to submerge it. Cook for 45 minutes to an hour, until tender. To this preparation you may add 1 cup of white wine, ½ cup of extra virgin olive oil, 3 bay leaves and a small bunch of thyme to enhance the preparation. Once cooked, cool down completely, clean with a cloth and take the skin off and portion. Mix in with some marinade and reserve.

- Peruvian corn: Add enough water to cover the corn. Season the water with sugar and salt to taste and 2 pieces anise star. Bring to a boil. Lower the heat and let it simmer slowly for about 20 minutes. Remove from water, let cool and reserve.

- Potatoes: Preheat the oven to 225° Fahrenheit. On a baking pan, add one layer of the potato rounds. Season with salt and add a couple of springs of thyme and 3 garlic cloves.
Cover with aluminum foil. When ready, put inside the oven and cook for about 50 minutes or until tender.

- Grilling: When everything is ready to grill, make sure you put the meat on the hottest part to get a nice sear. Since the octopus, the potatoes and the corn are pre-cooked you just want to get them hot and give them a nice smoky flavor. While grilling make sure you brush the meat, octopus and potato with the remaining anticucho marinade. Brush the corn with butter.

Felipe Torres and Jaime A. Torres are the executive chefs at Raymi in New York City.