Will orange really be the new black?

"El Chapo," also known as Joaquín Guzmán Loera, 61, handed over the rights to his name and signature to a new company, El Chapo Guzman: JGL LLC, which will be run by his 29-year-old wife, Emma Coronel Aispuro, an attorney for Guzman, Mariel Colon, confirmed to Fox News.

"This company was formed here in New York. Emma is the president of this LLC," Colon said, stressing that Guzman himself not would make a dime and that his name is not listed on the LLC. 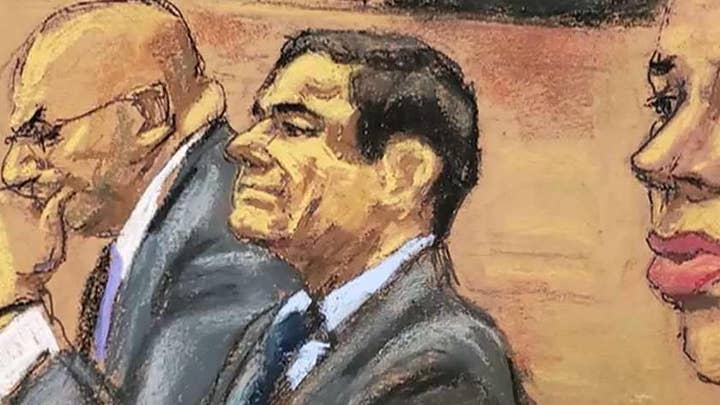 The design process has begun, Colon noted, and the plan is to have the first few items ready for purchase by this summer.

In the wake of his guilty verdict earlier this year in New York City, Chapo-inspired souvenirs have been selling crazy in the streets of his hometown Sinaloa. It's expected that a clothing collection in his name may follow suit, if you will.

A federal official also told Fox News that the drug lord has received jailhouse attorney visits to sign the paperwork at his wife's request.

Aispuro has been married to Guzman for 11 years and shares two 7-year-old twins with the drug kingpin, who was convicted in February on drug trafficking, money laundering and firearms possession charges. Her husband was found guilty of conspiring to smuggle large volumes of cocaine, heroin and methamphetamine into the United States.

The wife of the former Sinaloa cartel boss took to Instagram to announce her plan to launch the clothing brand. “I have a project for a line of clothing... It is my goal to promote my style and Joaquin’s,” Coronel Aispuro wrote to her approximate 100,000 followers.

She said she planned to release a line of caps, clothing and jackets featuring her husband’s signature as part of the brand’s logo.

“This project is an idea Joaquin and I have had for a long time. Before he was in the USA we talked a lot about this topic," Coronel Aispuro told the New York Daily News. "Really, it’s both of our ideas.”

The beauty queen turned mob wife said the inspiration for the brand also came from the couple’s 7-year-old daughters, who visited their father’s trial in December wearing matching white blazers and black bows in their hair.

“We’ll talk a little about both of our ideas — that he has and a touch of mine, obviously. Our greatest inspiration is our daughters,” Coronel Aispuro said.

Coronel Aispuro’s sense of style was highly publicized throughout the length of Guzman’s trial. She and her husband debuted matching crimson velvet jackets as a sign of solidarity in the courtroom on one occasion.

A woman who claimed to be El Chapo’s daughter, Alejandrina Gisselle Guzman, founded her own line of clothing, jewelry, and liquor in the former Sinaloa cartel leader’s name. However, “El Chapo 701,” a reference to the former mob boss’ 2009 Forbes list ranking, could possibly cause copyright issues for Coronel Aispuro.

In addition, Coronel Aispuro’s business venture may not receive the go-ahead from the federal government, which has aimed to recover the drug cartel’s massive profits. It also may be halted by New York State’s "Son of Sam" law that prevents former criminals from earning profits from their crime-related notoriety, the New York Daily News reported.