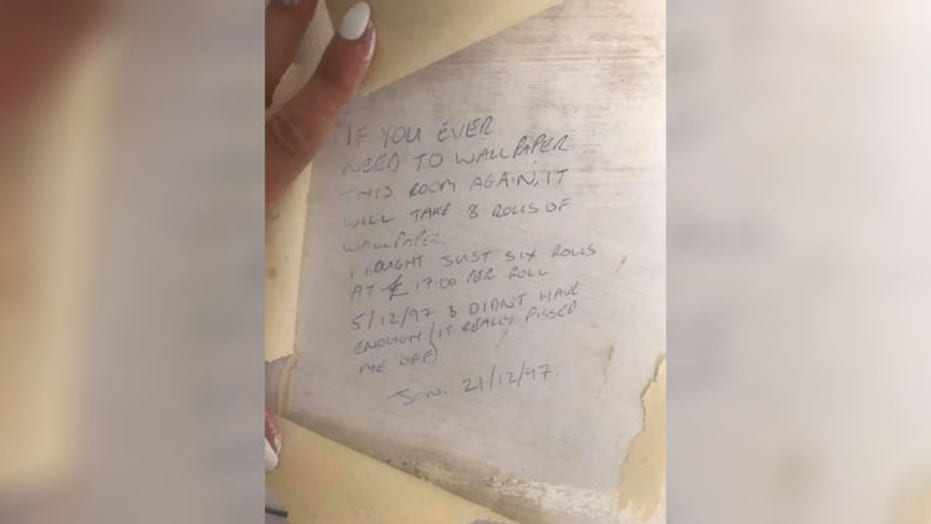 You never know what’s hiding behind your walls until you look.

A woman in London decided to redecorate one of the rooms in her house and started stripping the wallpaper. As she peeled back the layers, she says she uncovered a message that had been hidden behind the walls for over two decades.

Charlotte Morrison spoke with Fox News, saying that finding the message made the hours spent stripping the wallpaper worth it.

She uploaded a photo of the note to Facebook, which reads, “If you ever need to wallpaper this room again, it will take eight rolls of wallpaper. I bought just six rolls at £17 (about $21) per roll. I didn’t have enough (it really pissed me off).”

After posting the picture on Facebook, it received over 17,000 likes and was shared over 14,000 times. Amazingly, the post eventually reached Jon’s family, who contacted Morrison.

“It really made me chuckle and I’m just pleased that (Jon’s) relative contacted me and I could tell him how his note made so many people laugh,” she explained.

Since Jon doesn’t use Facebook, he was unaware of how popular his message had become.

Morrison hasn’t spoken to Jon directly, she explained. “I have spoken to (Jon’s relative),” she said. “She asked him questions I had asked and he confirmed them, he also told us about features in the house that was here when we moved. She said he hates social media, and I told her social media thinks he is a legend.”

Now, Morrison says she just needs to decide what to do with the room where the message was found.

“We actually have been torn whether to wallpaper or paint,” she said. “I originally wanted to paint, but since finding the note, I would like to test Jon’s math.”