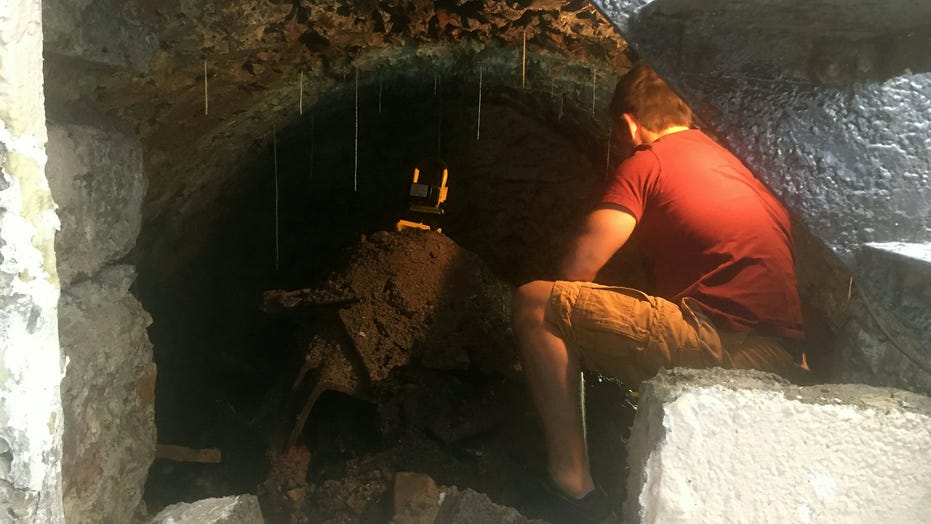 There are definitely worse things you could find buried under your house.

While investigating his new home, a man in England recently discovered that there was an entire secret room hidden under his house. And, after investigating the items he found inside the room, it’s possible that this secret basement could be over 100 years old.

Jake Brown says he discovered a secret cellar under his house, and believes it could be up to 120 years old. (SWNS)

“While having a lazy coffee standing outside the basement front door of the property, I noticed a patch in the wall of a texture different to the rest,” he told the outlet.

Noting that curiosity and boredom played into his decision-making process, Brown grabbed a drill and created two holes in the wall (one to shine a flashlight through, the other to look through). When he saw that the wall appeared to have a large opening behind it, he decided to break his way inside.

Jake Brown says that he measured the newly discovered room and found that it was 16 feet deep, about 10 feet high, and nearly 10 feet wide. (SWNS)

8 THINGS TO CONSIDER WHEN ADDING CARPET TO YOUR BEDROOM

“I proceeded to hammer out a larger opening through which I could get a better idea of the space, and if I should carry on making a mess,” he said. “Upon creating a large enough hole to fit through, I shone a torch into the dark, revealing the larger-than-expected space before me. The cavern had a lot of builders waste from another era, so I climbed inside to explore and take a closer look.”

“It had been used as an easy space, to hide the waste from renovating the property’s roof, guttering, doors, and windows many years ago before being covered up,” he explained. “As I moved deeper into the cavern I began to search for evidence that would tie it to a grouping of years, so as I could more accurately determine how long it had been covered up. In the dark I collected bottles, paint cans, and my golden find was the remains of a newspaper, though was more comparable to mushy silt.”

The bottles were reportedly etched with detailing common to the early 1900s. While the newspapers were mostly ruined, Brown says that he was able to eventually work out a date on the papers tying them to the 1960s, suggesting that the room had been sealed since then.

A friend of Brown’s joked to SWNS that the area, if big enough, could be turned into a grotto-type pool.