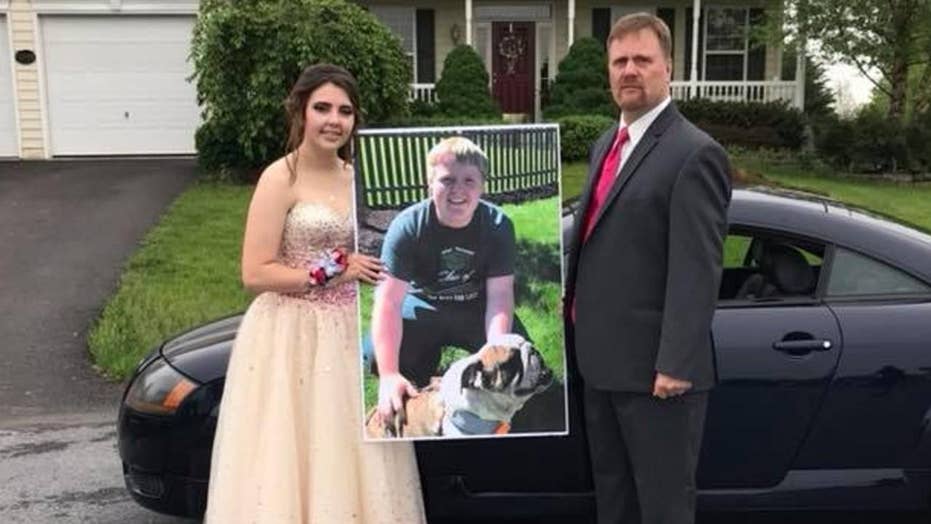 A bittersweet moment as Robert Brown, whose son Carter died in a car crash in April, took Kaylee Suders, his son's girlfriend, to the high school prom she was expecting to attend with Carter.

Grieving the tragic death of his 19-year-old son, a Pennsylvania father stepped up to accompany the young man’s girlfriend to her senior prom.

May 19, a few days after the one-month anniversary of Carter Brown's death, was also the night of the senior prom at James Buchanan High School in Mercersburg.

Carter’s father, Robert Brown, escorted Kaylee Suders to the big dance knowing that his son would have wanted his girlfriend of one year to attend, Fox 8 reports.

“My son was a sweet, caring kid, and Kaylee is very sweet too, and she is a part of our family,” Robert told the Centre Daily Times. “When the passing topic of prom came up, I kept thinking my son would want her to go. That prompted me to get the ball rolling.”

Though a devastated Suders initially did not want to attend the prom, she agreed to attend with her boyfriend's dad.

“I was kind of surprised before he asked me, and it was really, really heartwarming,” the high schooler told the Daily Times. “I didn’t have to think about it. I definitely said 'yes.' It was so great of him to ask me."

That evening, the Brown and Suders families gathered for a classic prom photo shoot before heading out in Carter’s “beloved” sports car, an Audi TT, Fox 8 reports. Before the big dance, Suders and Robert went out to dinner at T.G.I. Friday's — where the young couple had their first date.

At the big dance, Suders said “everyone just thought it was amazing" that Robert accompanied her.

"I had fun at prom, I am so grateful that Rob asked me to go," Suders told Fox News.

"I loved dressing up and taking pictures and dancing. I know it would have made Carter happy that I still went, and I know he’s smiling ear to ear at the fact I went with his dad," she added.

“Add this to the list of reasons why I love my husband... Since Carter couldn’t escort Kaylee to her prom, Robert stepped in. Kaylee, I know Rob wasn’t your first choice for a date, but he will forever be mine,” Carter’s mom and Robert’s wife, Kelly Brown, wrote on Facebook.

"It takes a special kind of person to step up, especially when they're hurting and going through stuff too,” Suders’ mom, Christina Nicholas, said of Robert’s kindness. “It's nice he took the initiative to ask her and have a good time.”

Suders and Carter had been dating about a year but had been best friends for about three years, Public Opinion reports. Carter was driving home from Indiana State University on April 15 when the Honda Civic he was driving veered into the opposite lane and was struck head on.

It turns out the Brown family had weathered even more tragedy recently, Public Opinion reported. Their eldest son, Christopher, died last September at the age of 23. The father’s effort to take Suders to the prom also “gave them something to look forward to.”

"We lost Chris in September. Seven months apart, it's an awful lot," Kelly said. "This gave us something to be excited about. So that was also kinda a gift to have something fun to look forward to. It was big deal for all of us."

“Life will have all kinds of curve balls that you can’t control," Robert said. "You have to have strength and courage to move forward.”