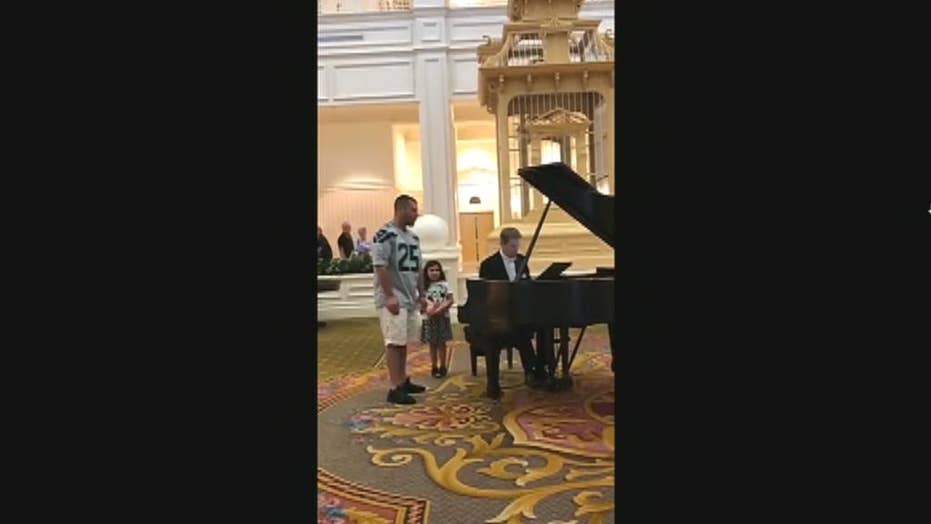 A talented father has become an overnight Internet sensation after footage posted online of his impromptu rendition of 'Ave Maria' in a Disney World hotel resort lobby.

Forget the parks — the real show at Disney World is going down in the hotel lobby.

A talented father from Connecticut has become an overnight Internet sensation after footage of his impromptu rendition of “Ave Maria,” which he belted out in the lobby of the Grand Floridian Resort, began making the rounds earlier this week.

Justin Gigliello, from North Stonington, tells Fox News he was visiting Disney World with his daughter when she asked the pianist at the hotel if her dad could sing along.

“He asked her what song and she requested the ‘Ave Maria,’” he said.

Gigliello — who began voice lessons at 15 and later studied at the Boston Conservatory at Berklee — then proceeded to wow everyone within earshot, all while his little girl looked on.

And at the end, the room erupted in applause.

“I’m a huge fan of Andrea Bocelli, Josh Groban and Michael Bublé,” Gigliello told Fox News. “Some of their pieces are what I sing daily in the house with my daughter,” he added.

Along with Gigliello’s daughter, Twitter was also quite taken by the moving moment.

“Talk about a smile and a song! Thank you for sharing this magical moment!!!” wrote an official Twitter feed for Disney World.

"THAT IS BEAUTIFUL!!!!" said another admirer who claimed to be a classical musician too. "Sung so pure and effortlessly. Beautiful job!!!!"

“The dad I am trying to be,” another user commented.

Gigliello, who currently works at an underwriting firm, told Fox News he was just happy to see his little girl smile.

“She is part of my inspiration to continue my journey,” he said. “I know for sure she’s my number one fan!”