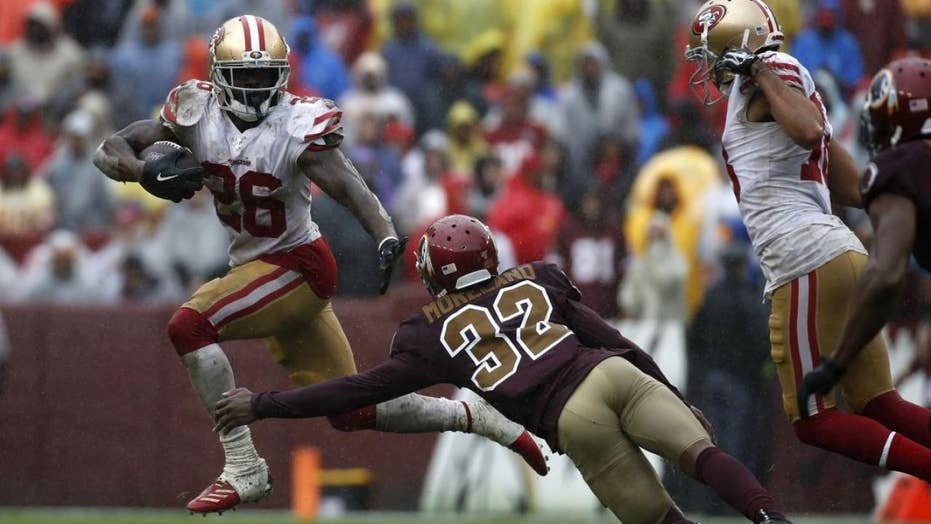 San Francisco 49ers CEO Jed York discusses the business of running an NFL team ahead of the upcoming championship game and how his business background affects his approach to football.

One grateful dog owner has spent $6 million on a Super Bowl LIV ad to thank the University of Wisconsin School of Veterinary Medicine (UW SVM) for treating his golden retriever for an aggressive form of cancer. Defying the odds, the pup beat a grim 1 percent chance for survival and is enjoying a new “leash” on life today, inspiring his owner to fundraise for veterinary research.

Last summer, David MacNeil and his family were heartbroken to learn there was a tumor on their dog Scout’s heart, and the retriever had about one month to live. Diagnosed with hemangiosarcoma, an aggressive cancer of blood vessel walls, Scout only had a 1 percent chance of beating the disease, according to UW SVM and WGN-TV.

Scout the golden retriever has a new "leash" on life after beating an aggressive form of cancer thanks to the University of Wisconsin School of Veterinary Medicine. (WeatherTech/YouTube)

"There he was in this little room, standing in the corner... and he's wagging his tail at me. I'm like 'I'm not putting that dog down. There's just absolutely no way,’” said MacNeil, the founder and CEO of WeatherTech, a car accessories company.

YOU MAY BE WALKING YOUR DOG WRONG, PETA FOUNDER SAYS

In July 2019, the MacNeils traveled to UW Veterinary Care, where Scout received chemotherapy, radiation therapy and immunotherapy. By September, the 7-year-old dog’s tumor miraculously decreased by 90 percent. Today, the tumor has “all but disappeared,” per UW SVM.

To express his appreciation, MacNeil will highlight the vet school’s incredible work with a commercial during the second quarter of the Super Bowl on Sunday.

In lieu of giving money directly to the school, the CEO bought the $6 million ad to raise awareness and inspire viewers to make donations of their own, WGN-TV reports.

“Scout’s illness devastated us,” MacNeil said. “We wanted this year’s Super Bowl effort to not only raise awareness, but also financial support for the incredible research and innovative treatments happening at UW SVM, where Scout is still a patient.”

“We wanted to use the biggest stage possible to highlight Scout’s story and these incredible breakthroughs, which are not just limited to helping dogs and pets. This research will help advance cancer treatments for humans as well, so there’s the potential to save millions of lives of all species,” he added.

Scout’s moving “Lucky Dog” ad has already been viewed over 300,000 times on YouTube, while an official for the vet school has described the honor as “amazing.”

“This is an amazing opportunity not only for the University of Wisconsin–Madison and the School of Veterinary Medicine, but for veterinary medicine worldwide,” Mark Markel, UW SVM dean, said in a statement. “So much of what’s known globally today about how best to diagnose and treat devastating diseases such as cancer originated in veterinary medicine. We’re thrilled to share with Super Bowl viewers how our profession benefits beloved animals like Scout and helps people, too.”

According to UW SVM, about one in four dogs will develop cancer during their lifetimes. Notably, naturally occurring tumors in dogs are known to share nearly identical traits to human cancers, regarding recurrence, metastasis (spread) and treatment response, among other characteristics.

The totality of the funds raised from Scout’s Super Bowl commercial will support research at the vet school, and help fund the purchase of equipment that helps identify new cancer-fighting treatments.

Scout, meanwhile, is happily back to his unofficial mascot duties at WeatherTech’s offices in Bolingbrook, Ill., and spending time with his “best friend” MacNeil.

Super Bowl LIV, between the Kansas City Chiefs and the San Francisco 49ers, airs on Fox this Sunday, Feb. 2. Kickoff is at 6:30 p.m. at Hard Rock Stadium in Miami Gardens, Fla.