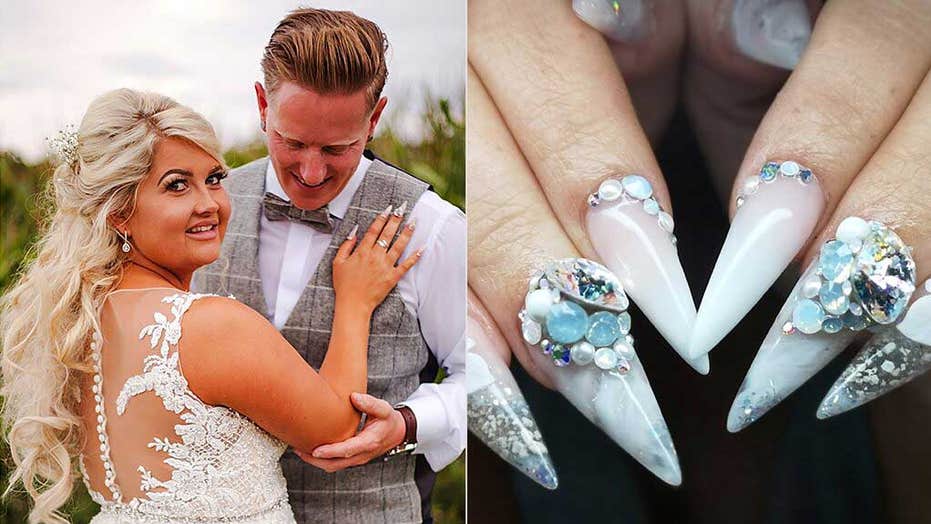 Well, it's certainly an original idea.

A bride-to-be in the U.K. was so devastated at having lost her father to cancer just months before her August wedding that she decided to incorporate some of his ashes into her manicure on the big day.

Charlotte Walton, of Staffordshire, England, cooked up the idea with her cousin Kirsty Meakin after Walton’s father Mick passed away in April.

“I was heartbroken when he lost his battle because I knew how much he wanted to see us marry,” said Walton, The Sun reports.

Charlotte Walton, 26, had hoped that her father Mick would be able to walk her down the aisle at her august wedding to now-husband Nick, but it "wasn't meant to be." (Caters News)

“Having the ashes attached to my nails felt like he was holding my hand. I knew it wasn’t the same as him really being there, but it was as close as we could get,” she added.

Walton, 26, said she and now-husband Nick had even rushed their wedding plans so her Mick would be able to take part, but sadly, it “wasn’t meant to be.”

Meakin, a popular nail artist who shares her tutorials online with 1.5 million YouTube followers, then presented Walton with a unique idea: mixing Mick’s ashes into the manicure.

“He obviously couldn’t be there at her wedding, and you know, he was such a massive part of our lives,” she said in the tutorial, which currently has over 50,000 views.

Meakin also explained how she and Walton sifted through “tiny bits of bone fragments” in Mick’s ashes, picking out some of the pieces to be mixed in with clear coating used atop Walton wedding nails.

“I got a bit nervous at this stage because I was thinking, ‘Oh my God, I’m actually putting part of my Uncle Mick into my cousin’s nails,” Meakin said in the video, calling the moment “surreal” and “emotional.”

Meakin’s efforts resulted in wedding nails with an almost glittery look — and a one-of-a-kind story.

Bride Charlotte Walton displays her wedding day manicure, pictured, which featured some of her father's ashes in the design. (Kirsty Meakin/Caters News)

“It was a unique thing to do but I loved it, I felt like he was able to walk me down the aisle, which I knew was something he really wanted to do," the bride said.

Walton added that she has since removed and framed the faux nails as a keepsake to remember both her wedding day and her late father, according to the Sun.

“The wedding was incredible, and everyone loved the nails," she said.